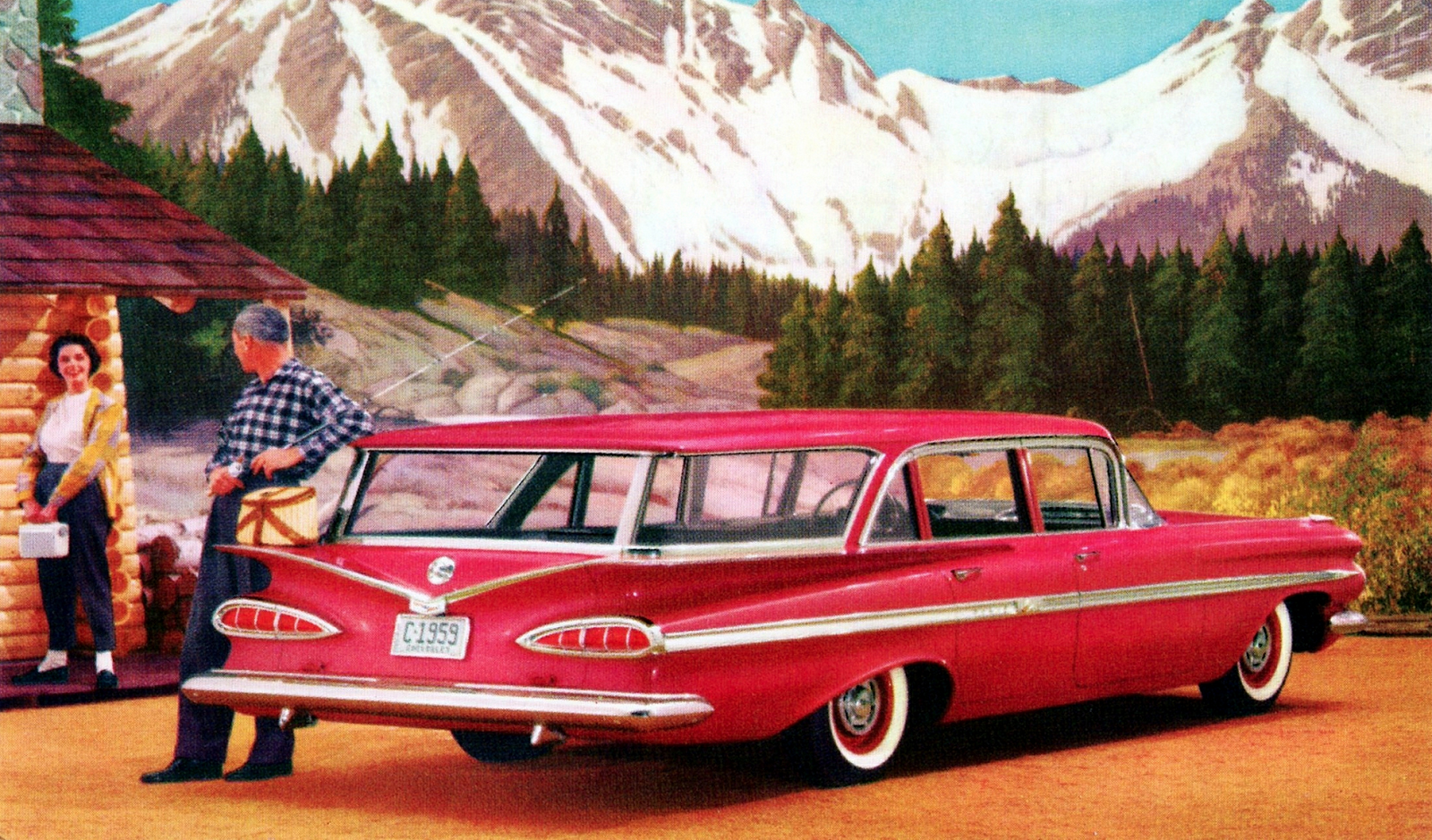 Dusty's dad mumbled something incomprehensible and retreated to the couch with his gold can of Caffeine Free Diet Pepsi. He clicked on Fox News. Yeah, he would definitely fall asleep there and stay put till late morning like he always did.

Dusty licked Smucker's Goober Strawberry off the knife and tossed it in the sink. He wrapped both sandwiches tightly with Reynolds Wrap and shoved them into a plastic Kmart bag. These had to stay fresh till tomorrow. He put the bag in the fridge then got washed up for bed.

Pale headlights passing through oak branches made black claws that crept up the wall. Dusty lay motionless, his tobacco brown eyes fixed on the ceiling.  He was too excited to sleep.

He always loved his dad's candy apple red '59 Chevrolet Nomad Station Wagon. He even had dreams about it. He dreamed of flying it like a bomber over jagged snow capped mountains. Once he dreamed of floating it down a sparkling river, past a witch's cookie house. Nowadays the car mostly just sat in the garage, dirty and covered in cat paw prints. But he remembered fondly when they would take it out to go fishing and when they installed the cassette player together. It never bothered him that the clunky wagon was so old. Actually, he loved that it looked like nothing else in town. His dad had a racy '91 Dodge Shadow too, but Dusty begged his dad to teach him how to drive on the wagon because one day that Chevy was supposed to be his. But then his dad got sick and eventually forgot about their pact. Dusty was never allowed to use it these days. But tomorrow was going to be different.

The alarm on his phone went off right before sunrise. He quickly turned it off and 10 minutes later he sent the text.

The garage was far enough away from the house so he wasn't worried about the roar of the engine or the groan of the garage door. He rolled out of the driveway and 5 minutes later he was pulling up to the gravel road that led to the Misty Hills Trailer Park. Taco was leaning against the entrance sign with headphones on, his sinewy arms crossed. He gave his signature cartoon grin and nod as he strutted towards the station wagon.

Taco got his nickname because his father was supposedly a Mexican. Neither of them had ever seen his dad so they just took Taco's mom's word for it. But Taco didn't look very Mexican with his shock of fluffy blonde hair and ghostly blue eyes. He also had a cool scar that split his right eyebrow in two. And he was missing a tooth, which was Dusty's favorite feature on Taco. It made him look like a Garbage Pail Kid, a handsome one if that was possible. Sometimes Taco made a whistling noise when sucking air through the hole in his teeth.

Today Taco looked like America. He wore a blue mesh tank top, red sweatpants pushed up over his fuzzy calves and white high-top sneakers. He jumped in the front seat. Dusty noticed that Taco smelled like charcoal grilled hot dogs, which made his stomach grumble.

They drove down the valley past the giant dairy barn with fields of grazing cattle. The mountains in the distance were saturated with fall colors. Dusty loved fall. He rolled down his window. They drove past the old processed cheese factory and past a pumpkin patch that was behind a rotted wooden fence adorned with rusty barbwire.

Dusty had to slow down to make sure he didn't miss the turn, then he took a sharp left on a dirt road that cut straight up the mountain. At times he wasn't sure if the wagon would make the gravelly dips in the road, but 20 minutes later they got to the turn off.

Taco jumped out to help Dusty back the wagon right up to the edge of the cliff. Then he got back in and they both crawled over the back seat to open up the trunk from the inside. They sat at the very edge of the opened up wagon, their legs kicking over the abyss. The view was stunning. They could see the entire town and beyond.

Taco pointed out the carnival rides being set up for the county fair in the giant field by the mall. Dusty spotted the haunted house ride called the Demon Hole. He couldn't wait to go later that weekend. He asked Taco if he wanted to go and Taco replied, "For sure."

That reminded Dusty of the Halloween cassette tape he had grabbed on his way out. He found it years ago in the checkout aisle at Hills Department Store. He climbed back up front and popped in the tape.  He pressed PLAY and a song about a swamp creature came on.

Back on the edge of the cliff they ate the Goober sandwiches. They mocked the cheesy music (although Dusty secretly loved it). They made fun of the skinny nerd who worked at 7-Eleven.  They made plans to see Critters 2 at the Movie Twin. Taco told a dirty joke so Dusty thought it'd be a good time to try out the joke he found on a wrapper of Banana Laffy Taffy:

Taco kicked his head back and laughed and Dusty could see a glob of peanut butter and strawberry jelly goo filling the gap in Taco's smile. The cassette player clicked loudly and the tape ended.

A strong breeze kicked up and all they could hear was the sound of leaves rustling in their branches. Taco lay on his back, his hands behind his head. Dusty lay back too and looked over at Taco who was sucking at the Goober stuck where a tooth should be.

Dusty got a brief, nagging feeling that his dad would be awake soon and discover that the wagon was gone. But then Dusty didn't care because today was more magical than any of his dreams and it was only going to get better. 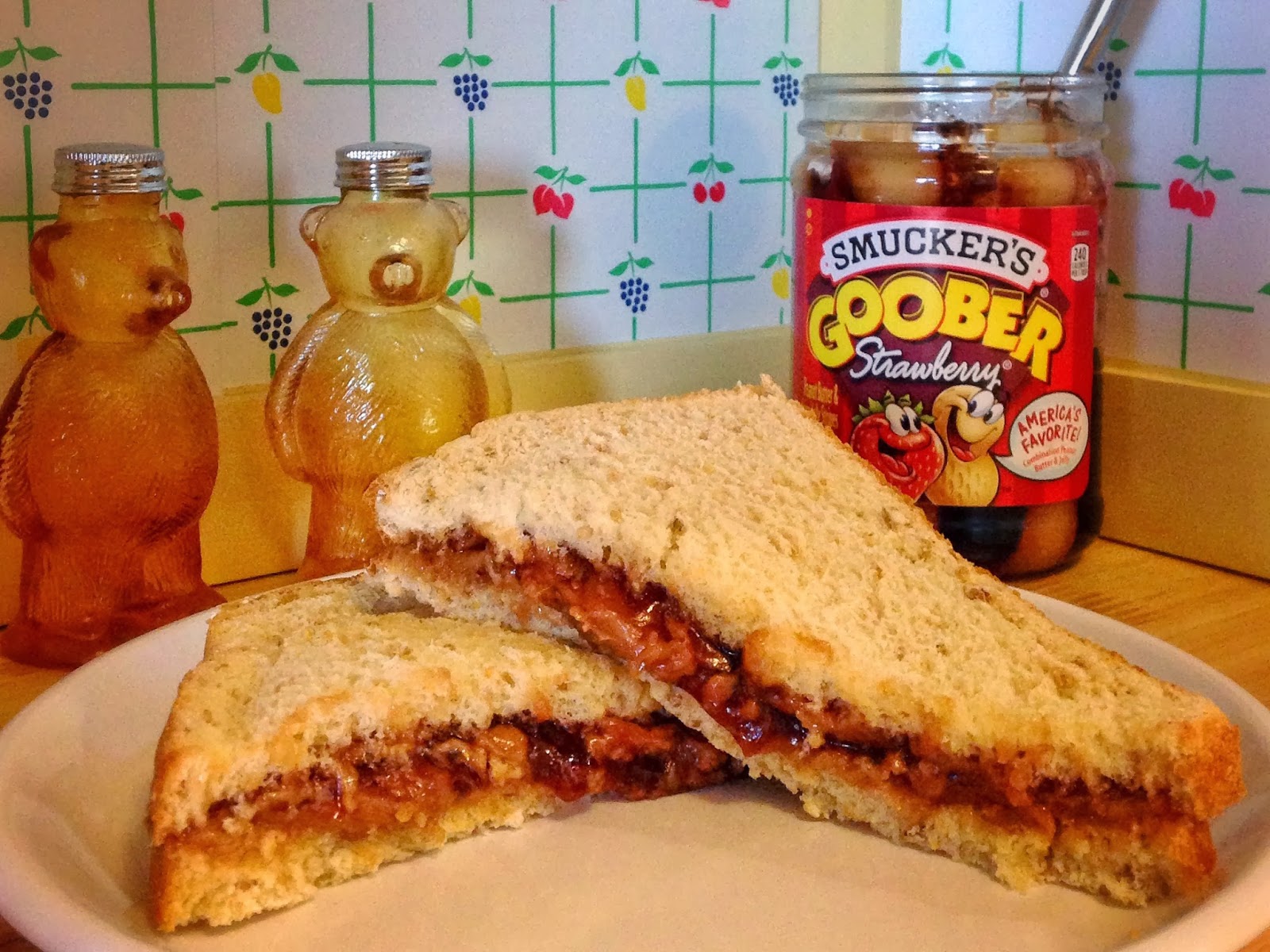 McDonald's brings back their popular Blueberry & Crème Pie for the first time in 5 years! McDonald's fans are rej...
Read More