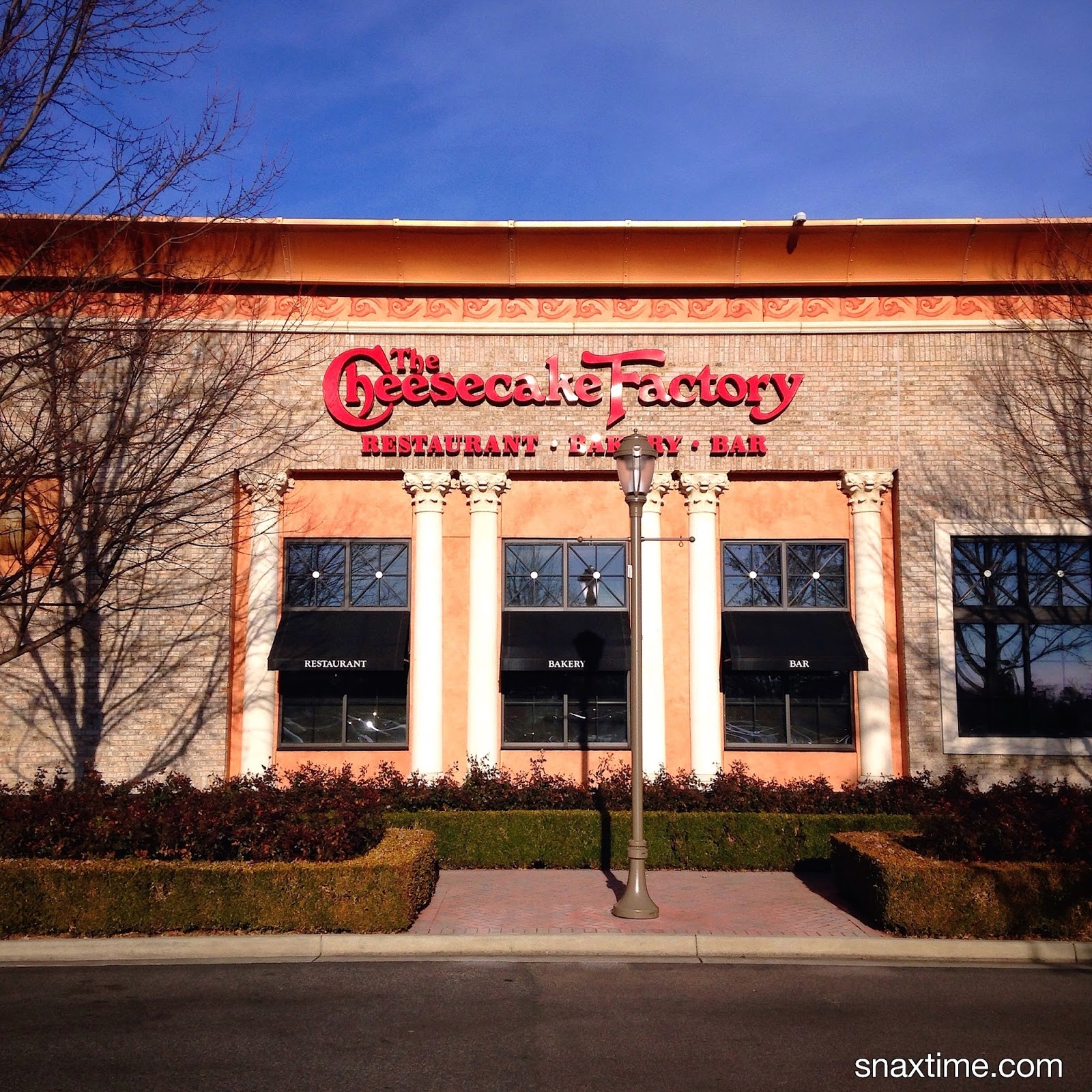 We had never been to The Cheesecake Factory, but we always really wanted to. We first heard about the popular chain restaurant years ago but never had the chance to eat at one since there are no locations in NYC. First opened in 1978 in Beverly Hills, CA, The Cheesecake Factory is known for its impressive assortment of cheesecakes, enormous and eclectic menu and large portions. On a recent trip to Midlothian, Virginia for the holidays, we grabbed our sister and set out for lunch at The Cheesecake Factory with much excitement and anticipation.

The Cheesecake Factory serving the Midlothian area is located in the Short Pump Town Center at 11800 West Broad Street in Richmond. The shopping center is quite nice and the restaurant itself looks like a casino. Inside, the decor is a wonderfully tacky and fanciful mix of 1980s looking, Vegas-style Greek, Roman and Egyptian design elements. 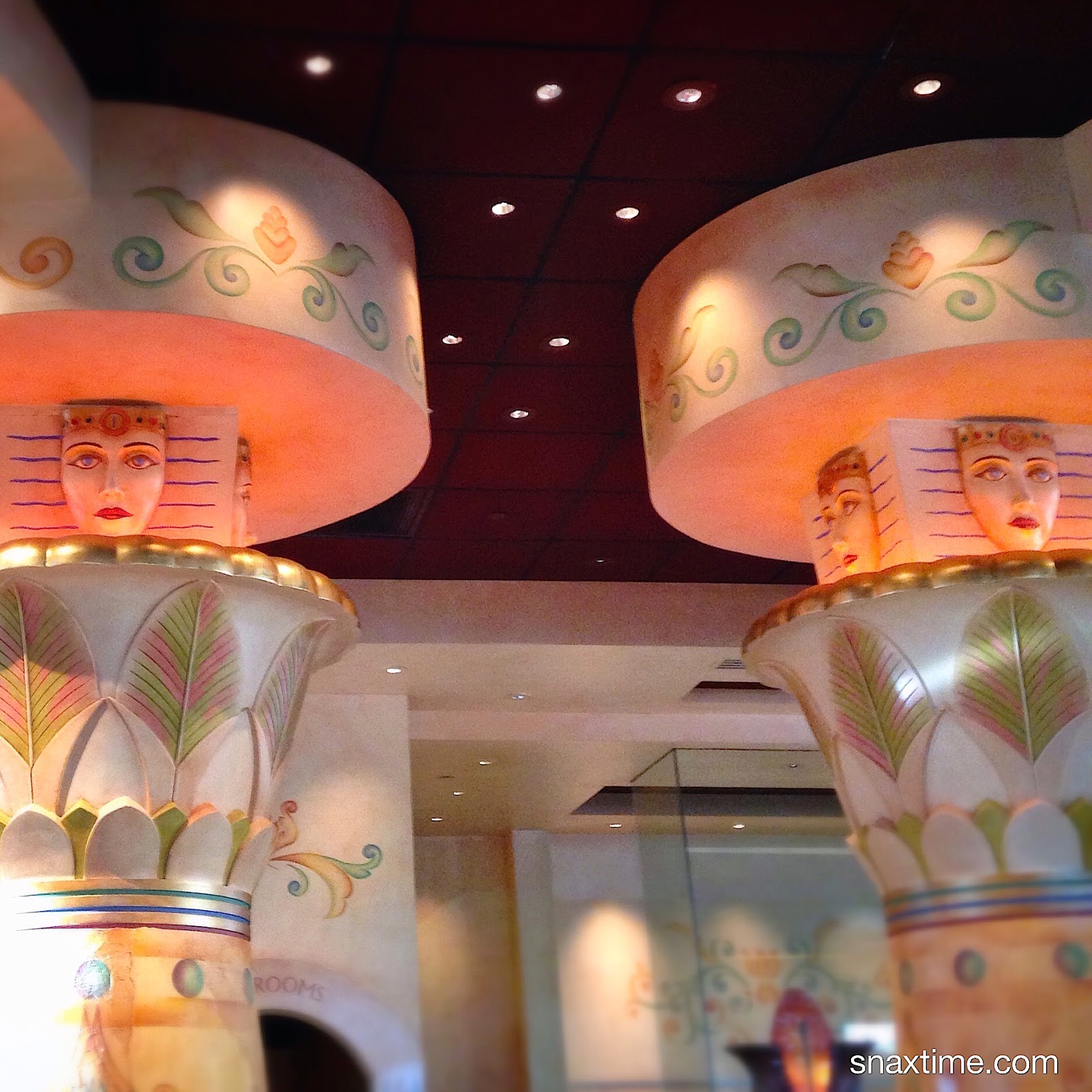 The place was packed, which was surprising because we arrived at 4PM. We were greeted warmly by a young lady and she took our name. She told us that the wait would be around 20 minutes. Behind us was the bakery section with a large display case housing all of the different kinds of cheesecakes. TVs mounted on the wall scrolled through gorgeous pictures of food offered on the menu. We stared in awe trying to decide what to order when a kind woman approached us and told us that she had just left the bar area and that there was a table available there, which was first-come-first-serve. Right then our buzzer went off and we were taken to a booth, but we asked the waitress if we could sit at the bar table which looked more roomy and had better sunlight. She said of course.

We had a plan of attack before coming and that was to order 3 appetizers and leave room for some cheesecakes. This was a difficult task as the menu is around 20 pages and everything on it sounds just wonderful. You can basically order any typed of food: American, Tex-Mex, pan-Latin, Asian, pizza, pasta, burgers, sandwiches, salads -- you name it. The waitress, who was very pleasant and knowledgable, also warned us that the portions are large.

Here is what we ordered:

CRISPY CUBAN ROLLS
These came out first and were located on the "Small Bites" section of the menu. The rolls consisted of crispy fried wrappers filled with slow roasted pork, ham, melted Swiss cheese and pickles and served with a tangy mustard dipping sauce. The pork was succulent and the cheese was nice and gooey. The rolls overall were piping hot and fresh and tasted just wonderful in the mustard. These were our favorite savory food item that we ordered. 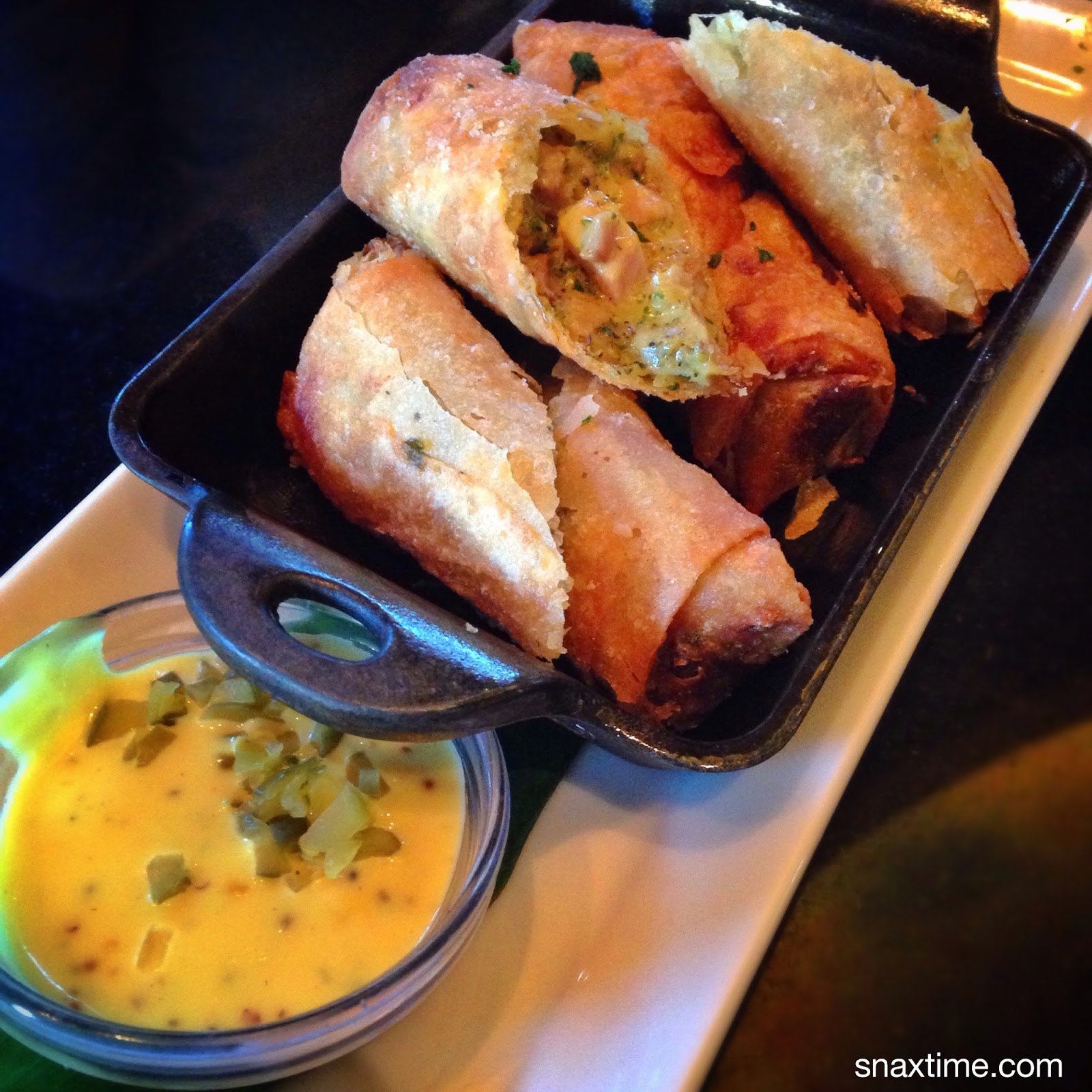 CRISPY CRAB WONTONS
These arrived next. The fried wonton wrappers were filled with a blend of crabmeat, cream cheese, green onion and water chestnuts and served with a tangy sweet chili sauce. Our sister liked these the best and we really enjoyed them as well. There was an impressive amount of crab in the wontons and the sweet 'n' spicy sauce really tied all of the flavors together nicely. 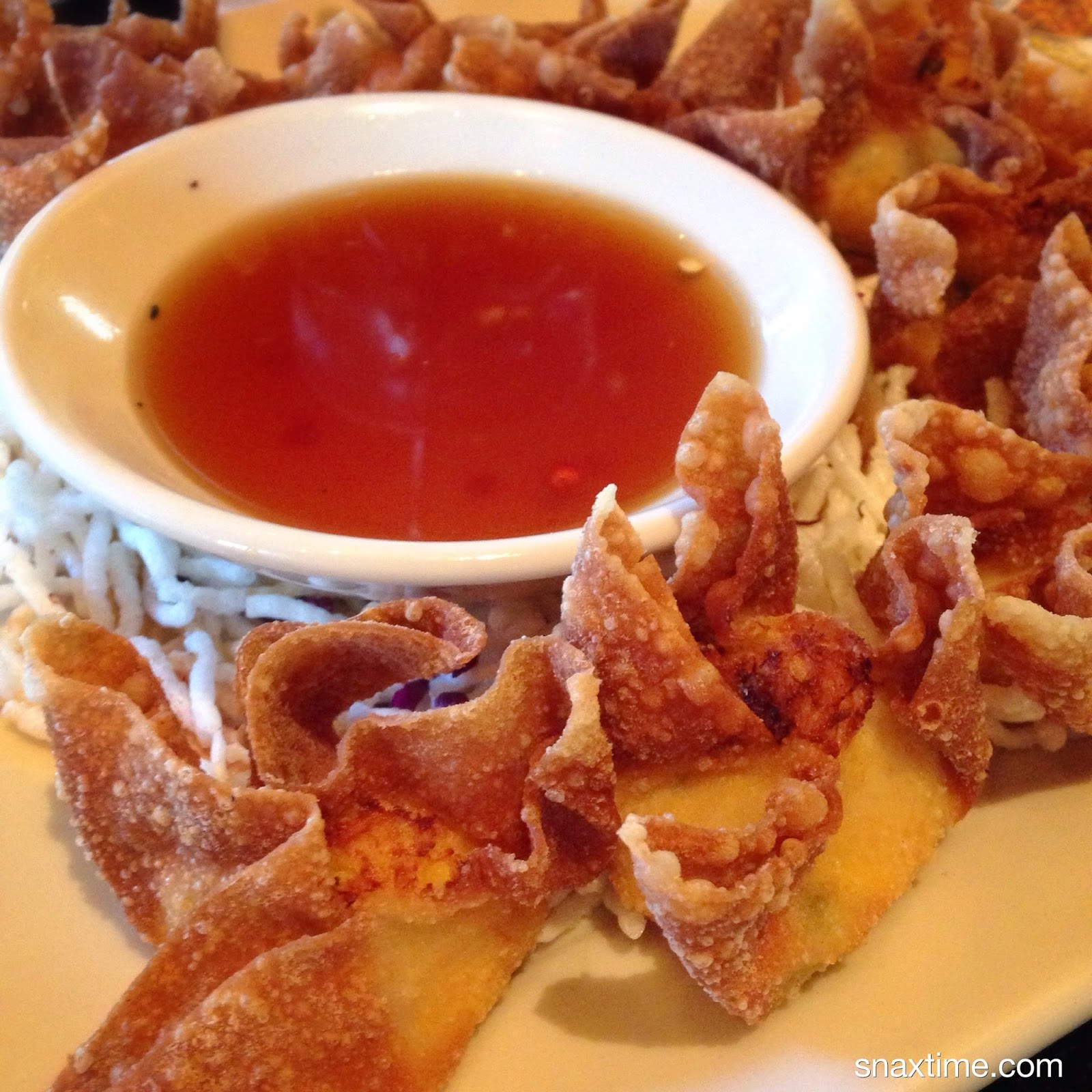 FRIED MACARONI AND CHEESE
We were most excited for this appetizer and had decided on it when watching the TV screens behind the bakery. The portion was generous and we really loved the flavors of the mac and cheese coated in breadcrumbs and served with a creamy marinara sauce. Unfortunately the fried mounds were cold inside. We contemplated sending it back, but we were already getting full so we decided to have it wrapped to go and save room for dessert. 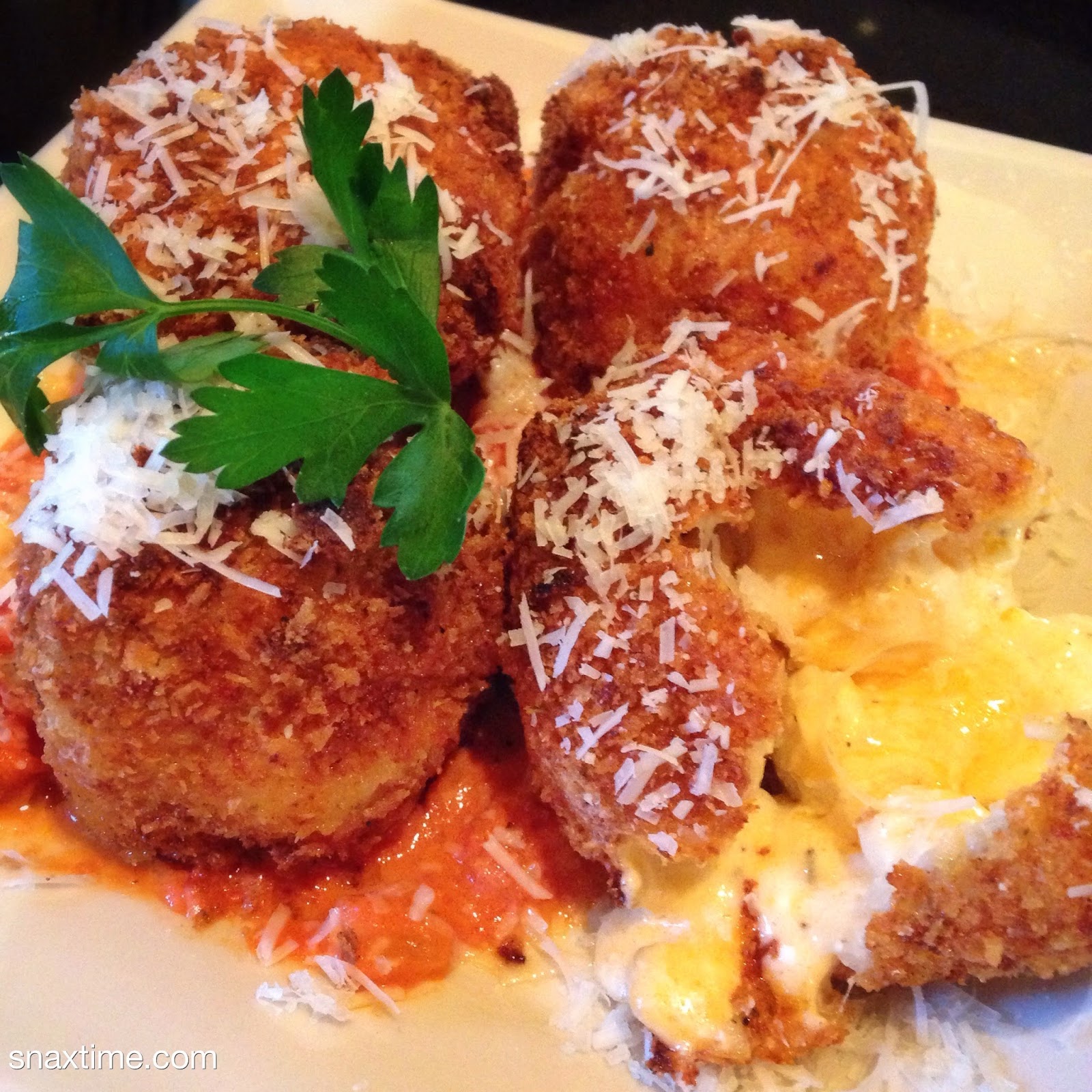 BANANA CREAM CHEESECAKE
We had also already decided on our cheesecakes when waiting for our table. This cheesecake had banana cream cheesecake on a buttery graham cracker crust and topped with bavarian cream, whipped cream and fresh sliced bananas. The flavors and textures were outstanding and we found the overall effect to be light and refreshing (for a cheesecake). The cheesecake is made with no artificial flavors and the banana flavor was fresh and not too overpowering. We actually preferred this dessert without the fresh banana slices! 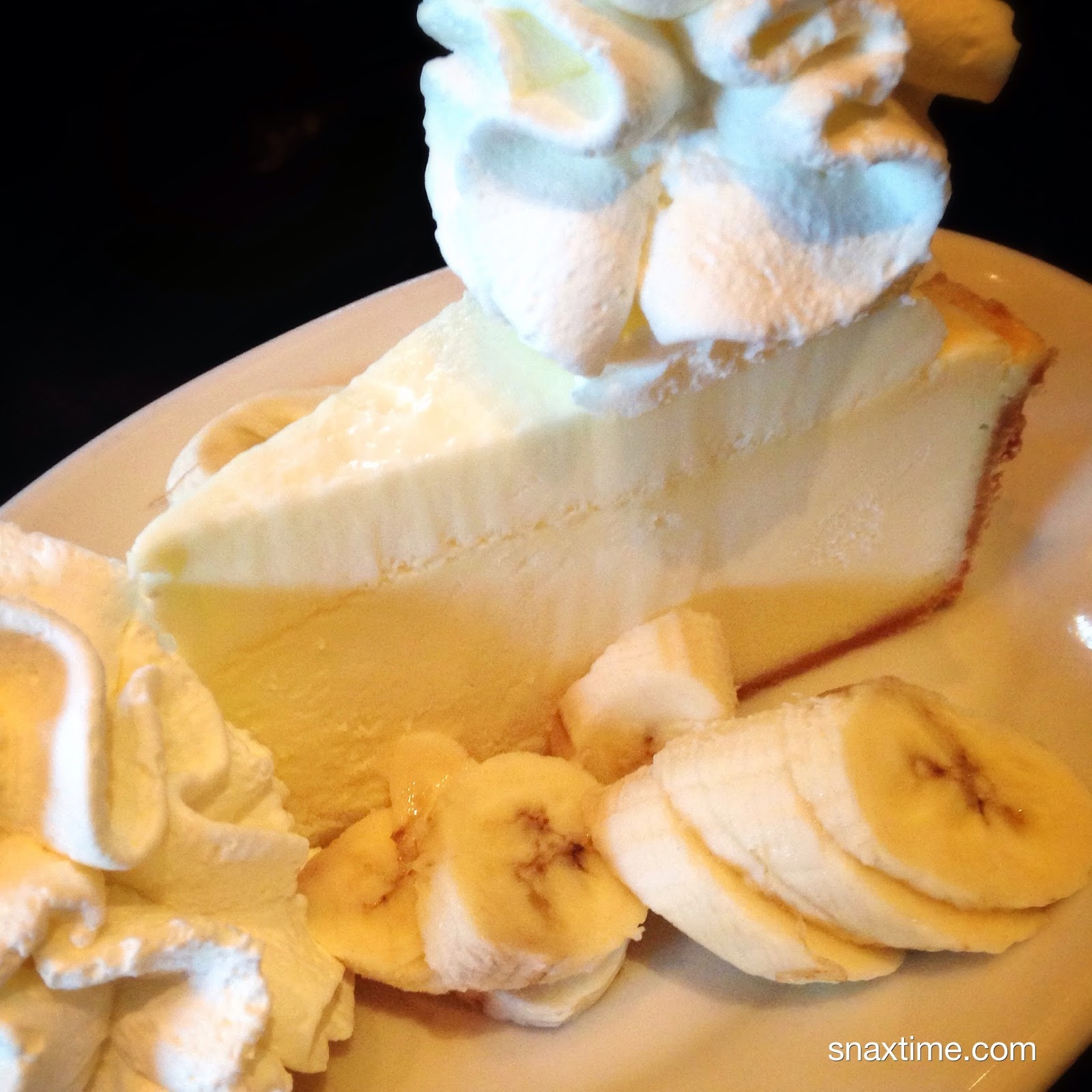 ADAM'S PEANUT BUTTER CUP FUDGE RIPPLE
This was the shining star of the entire meal! This decadent treat had creamy cheesecake swirled with caramel, peanut butter, Butterfingers and Reeses Peanut Butter Cups on a chocolate cookie crust and topped with a generous swirl of peanut butter mousse. Our eyes rolled into the back of our heads when we took our first bite and we began to giggle. The flavor combinations and textures are perfection and a true match made in heaven. This remarkable slice of dessert justified the lunch trip and left us wanting to come back. 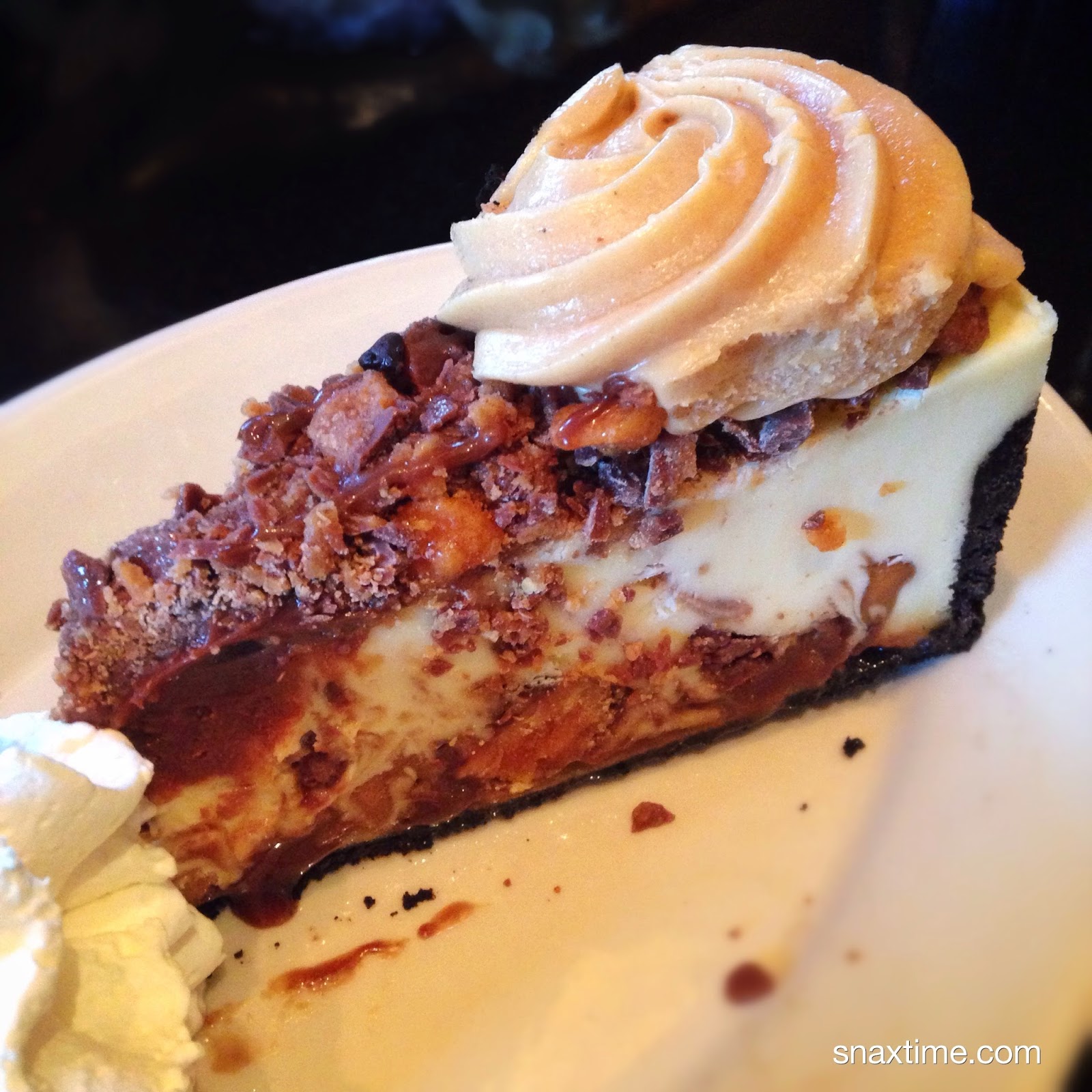 It's a good thing that there are no Cheesecake Factories in NYC because if there were we would eat there every week and weigh 500lbs! So it goes without saying that we can not wait to come back and try more of what this magical place has to offer.

McDonald's brings back their popular Blueberry & Crème Pie for the first time in 5 years! McDonald's fans are rej...
Read More