We always fondly remember those magical dinnertime hours spent at Chi-Chi's when we were a kid. Almost always located by a mall, the wildly popular Tex-Mex/Sonoran chain was a nationwide success in the 80s and 90s and those of us lucky enough to eat there all recall the magic that was their chimichanga. The singular best menu item (alongside the fried ice cream), their chimichanga was a sinfully delicious, deep fried hunk of heaven. Sadly, after a series of bankruptcy filings and a severe hepatitis A outbreak caused by contaminated green onions, all American Chi-Chi's shut down in 2004. While Chi-Chi's still exists in some countries and as a brand of salsa, the American Chi-Chi's chimichanga is a thing of history.

The chimichanga, which is essentially a deep fried burrito, is still a regular staple on most old school Sonoran-style Mexican and Tex-Mex menus. The last five years here in New York City, Mexican cuisine has really taken off, but the trend has been to emphasize more upscale Mexican or, on the other extreme, traditional street-style Mexican tacos and tortas. While we welcome this wholeheartedly, all of this has left the beloved chimichanga in the cold, and one has to seek out the older, pre-hipster Mexican establishments to get their chimichanga fix. Luckily these establishments, the ones who still offer complimentary chips and salsa and large neon green frozen margaritas, are hanging on in this age of new wave Mexican gastronomy. We recently visited a handful of old school Mexican restaurants to try their chimichanga and see if we could relive the glory of the Chi-Chi's era. Here is what we discovered: 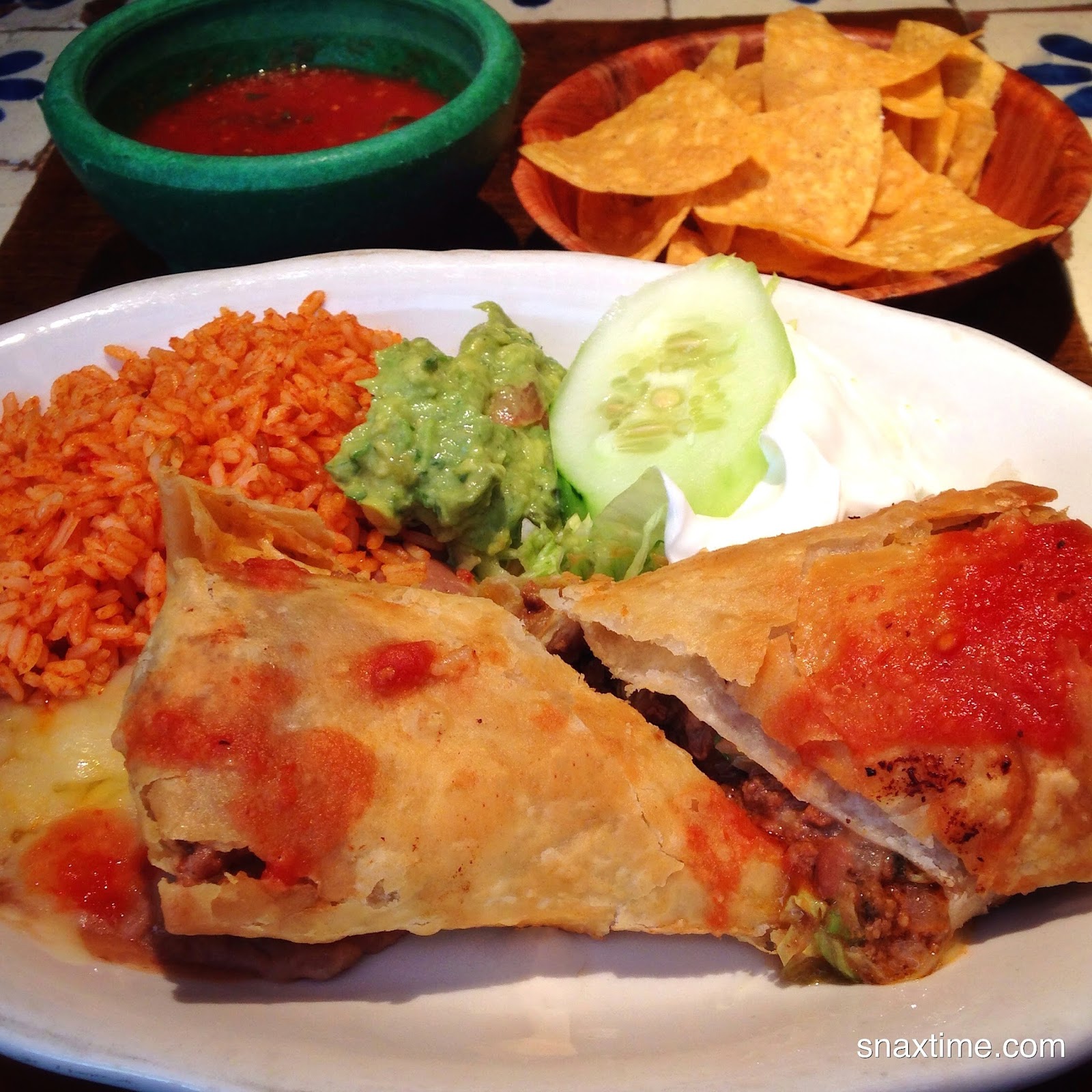 El Cantinero has been on University Place for decades and despite the coming and going of trendy Mexican restaurants, food trucks and Chipotle's in the area, it is always packed because locals know that the food is going to be comforting, feel-good-fresh and delicious.

We arrived and the friendly staff sat us immediately by a sunny window and ran us out a bowl of freshly made chips and homemade salsa, which tasted lovely. We ordered the chimichanga and asked if they could use ground beef, our protein of choice when ordering Mexican food, and they said of course. The chimi came out quickly and was lightly topped with red salsa and served with rice, refried beans and cheese, guacamole, sour cream, lettuce and cucumber. The chimichanga was piping hot and tasty with lots of greasy beef and cheese inside. The cold sour cream, guacamole and fresh fixin's tasted wonderful with the chimichanga and really freshened up the dish. The rice was not the best we've had but the old school refried beans and cheese more than made up for it.

We found this chimichanga to be heartening and reminded us of the old Mexican restaurants one might find by a strip mall in suburbia -- which is a good thing. It wasn't like a Chi-Chi's chimichanga but we still loved it! 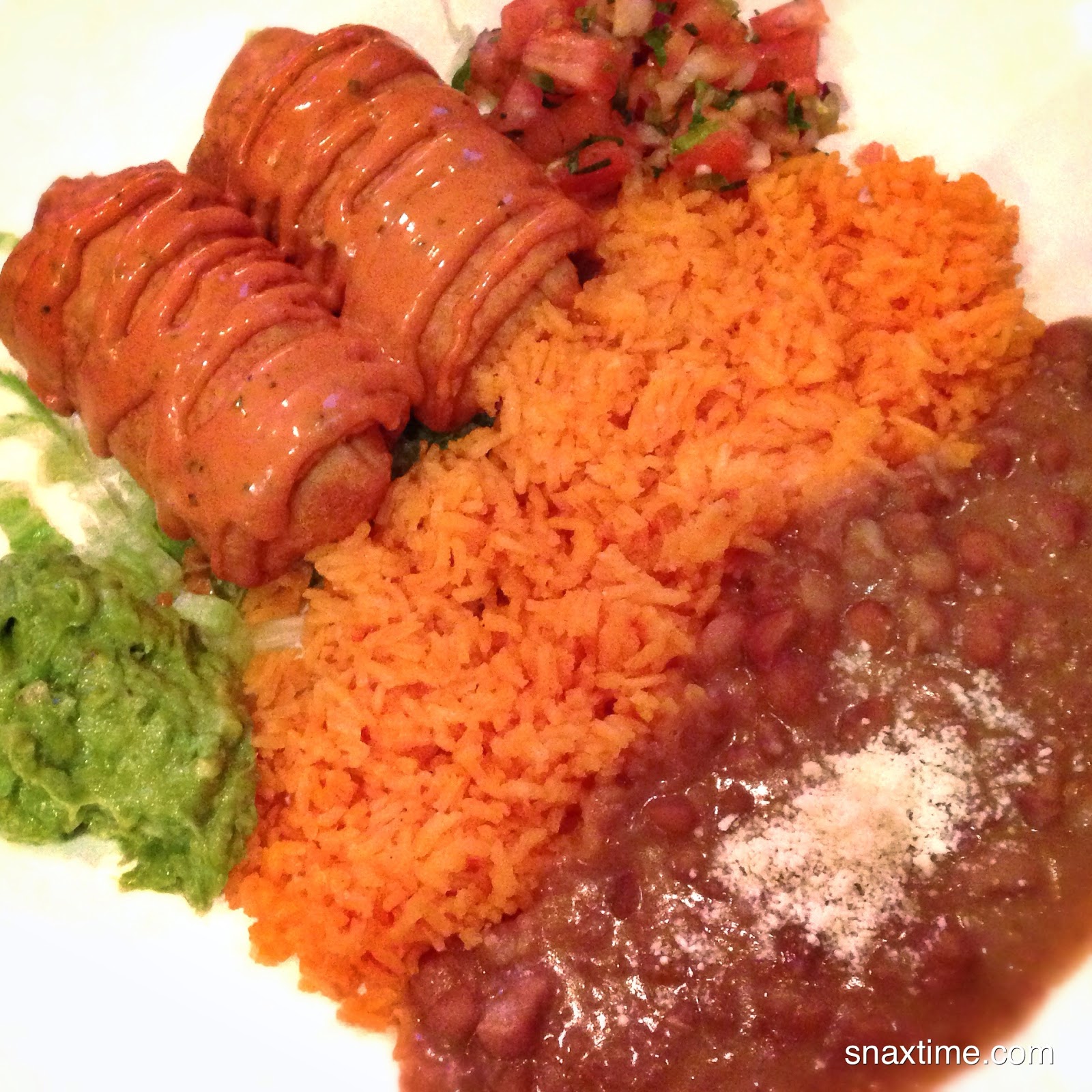 Like El Cantinero, Gonzales y Gonzales has held out for years as one of the most popular Mexican/Tex-Mex restaurants in the area despite constantly changing food trends. Unlike El Cantinero, this restaurant fancies itself a tad more upscale and nightclubby. We came for lunch and were encouraged by the hostess to sit at the bar. Typically we love eating at the bar so we enthusiastically said yes. Within minutes we noticed they were setting up a large party in the dining room which explains why they didn't want us sitting in there. The bartender tended to us right away and took our order, but ultimately we were left without any complimentary chips and salsa, although the tables for the awaiting party all had plenty. This really upset us, but we couldn't stay that mad for long because the meal came out quickly and was actually very delicious.

The chimichanga at Gonzales y Gonzales only comes with chicken, which is fine because this menu item is done so well. The dish actually has two small chimichangas, each stuffed with seasoned ground chicken and cheese. The filling had a nice cilantro flavor and the chimis were topped with a beautiful creamy and sweet sauce that had a nice kick of smoky chipotle. The meal was served over lettuce with pico de gallo, guacamole, rice and beans. The rice was infinitely better than El Cantinero's but their beans were not as good.

Once again, this chimichanga was not like what we remember at Chi-Chi's, but it was very well made, fresh, hot and satisfying. We really didn't need the extra chips and salsa because by the end of the meal we were very full, but it still really annoyed us that we were left chip-less and this ultimately colored our experience for the worse. That being said, we would come back again and insist on being seated in the dining room. 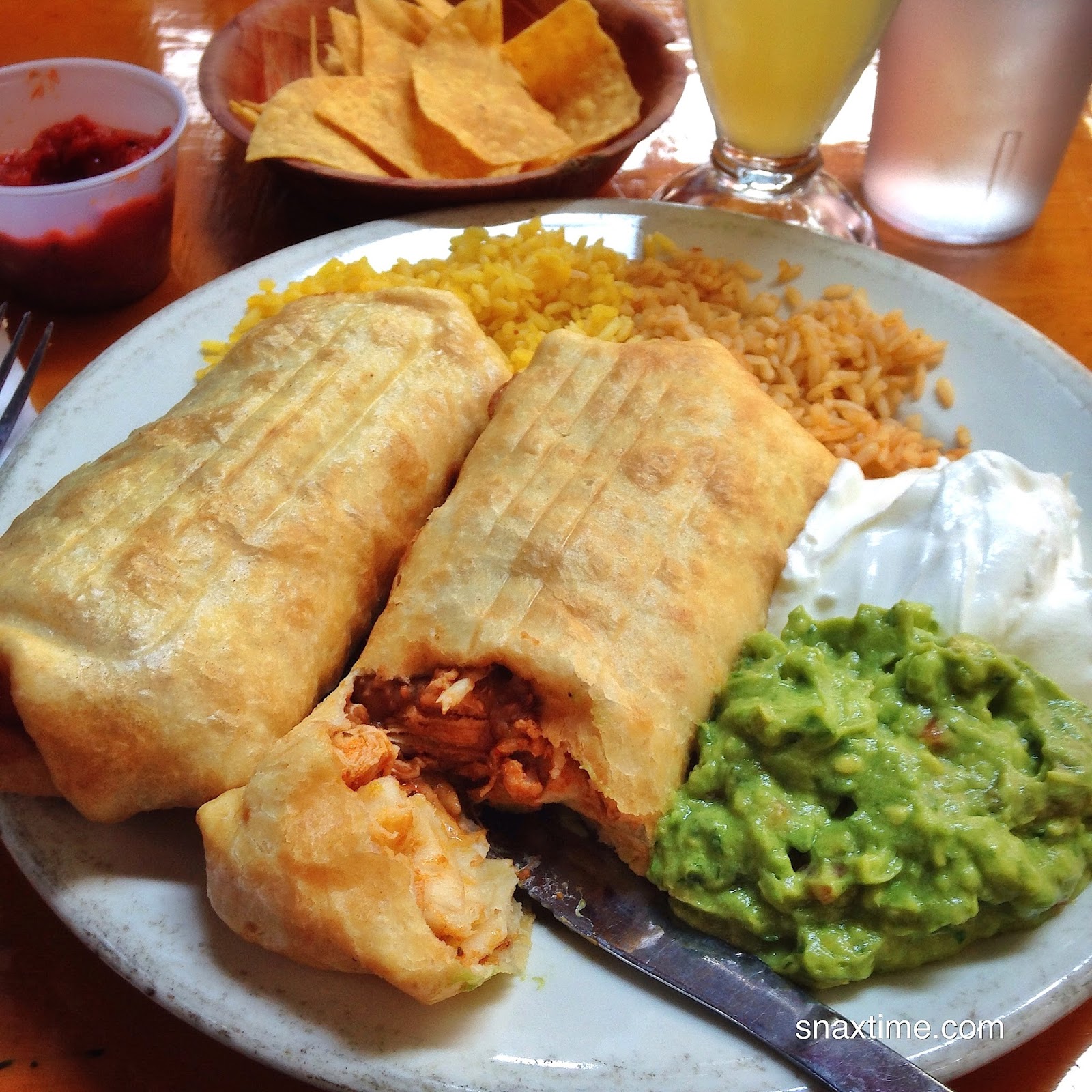 We used to go to Panchito's in college for underage drinking. They've never been known for their food, but rather as a place with decent margaritas. Panchito's most recently gained some attention when Blair Waldorf from Gossip Girl had her bachelorette party there, an obvious nod from the writers of that show who remember Panchito's as a college bar with plenty of tequila and meh food. Panchito's has managed to stick around for decades and they have chimichangas on their menu so we decided to try them out and see how they compared to our previous chimi meals.

We sat outside at a sidewalk table on a beautiful day and ordered the chicken chimis and a marg. The service was great here and we got our margarita on the rocks with salt and complimentary chips and salsa in record time. The chips were clearly from a bag and the salsa (served in a plastic cup) was from a jar and tasted more like straight up tomato paste, but we were just happy to have received them.

The chimichangas arrived and we were impressed with the amount of food. There were actually 2 quite large chimichangas on the dish alongside 2 types of rice and lots of sour cream and guacamole. The rice was dry and tasteless and we only had a couple of bites. The chimichangas, however, were good and filled with a generous amount of stewed shredded chicken, refried beans and cheddar cheese. We wished they were a bit crispier, but the flavors were really yummy and the guacamole and sour cream (and even some of the salsa) tasted great with the chimis.  We actually couldn't finish the meal and left completely stuffed.

While Panchito's is on the bottom of the list of the places we've tried as far as flavors go, the food was actually pretty good and the service was impeccable. It's no Chi-Chi's in the magic department, but it was still a nostalgic blast from the past. 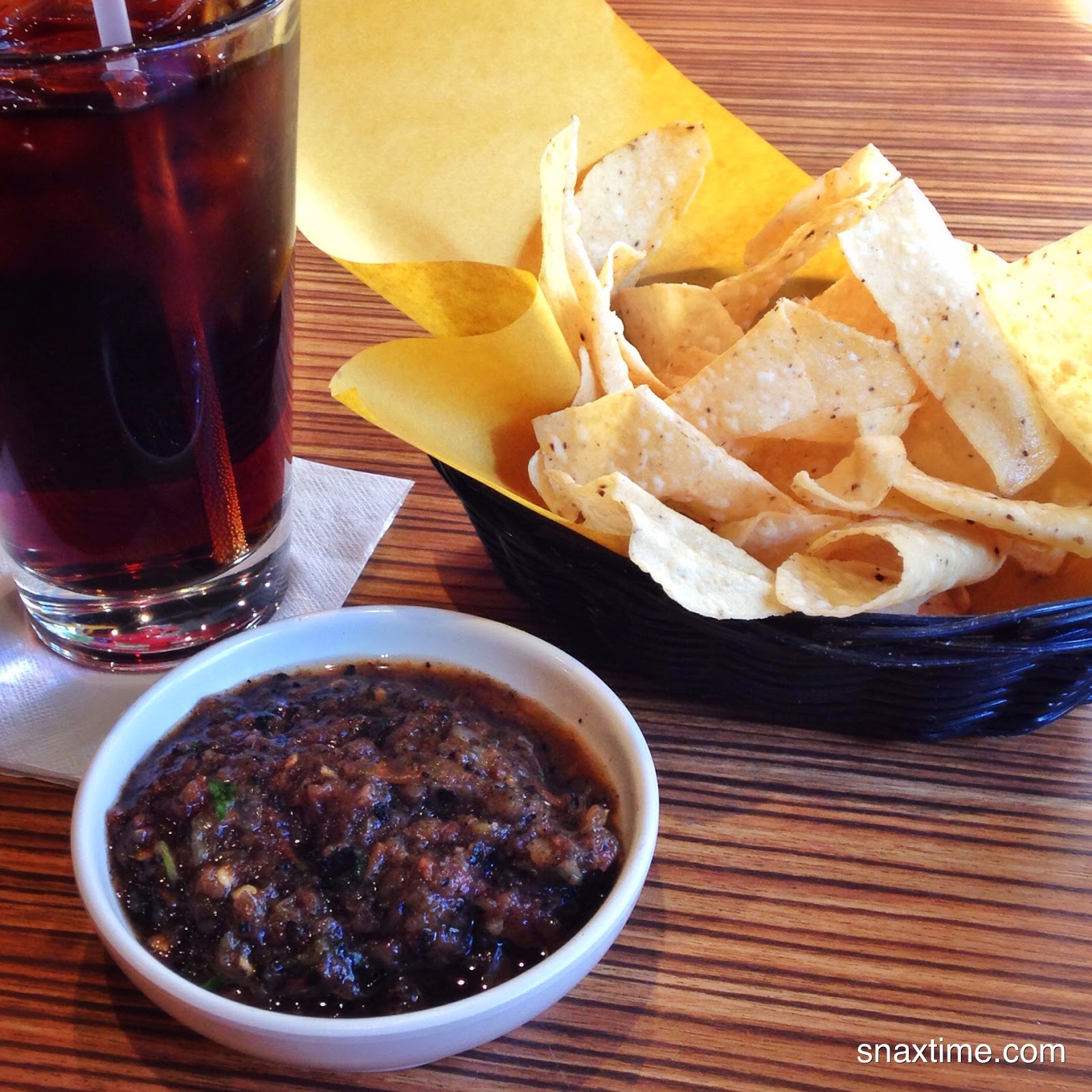 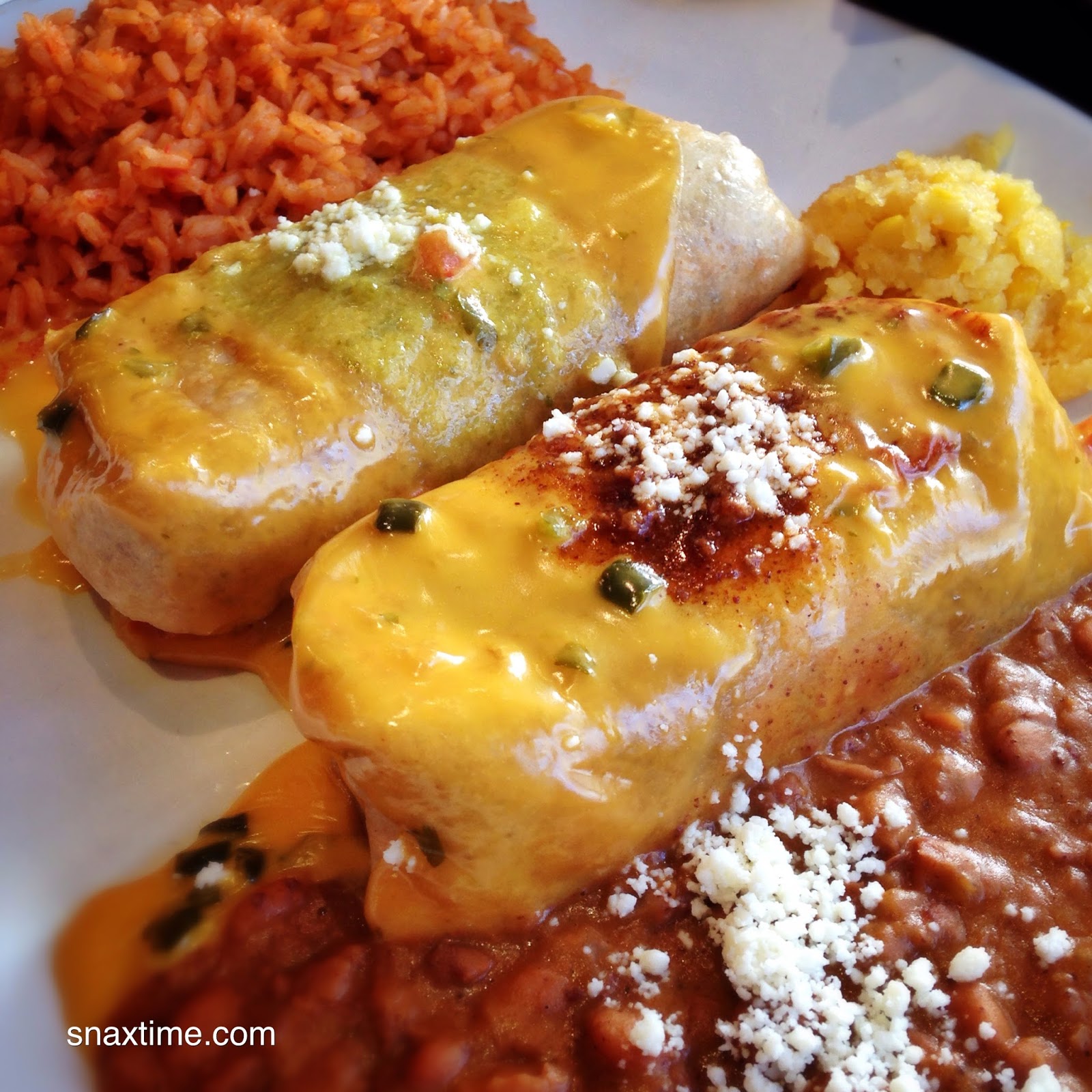 Chevy's Fresh Mex is a Tex-Mex/Sonoran style chain restaurant founded in 1981. We used to frequent the Chevy's in Battery Park City and it was one of our favorite restaurants in that area. Unfortunately that Chevy's closed down a few years ago, but there is still a Chevy's right off of Times Square.

We went for lunch and asked to sit by the window on the second floor. The hostess was very friendly and wiped off our table before she seated us. The manager came over right away and took our order. We ordered two Mini Chimichangas off the Fresh Mex Combos portion of the menu, one with Picadillo Beef and one with Salsa Chicken. Our Diet Coke and complimentary chips and salsa came out quickly. The chips were hot, thin, salty and crispy and the salsa was a fresh fire-roasted salsa with a nice amount of spicy heat. These were by far the best chips and salsa of all the restaurants we visited and in a way it reminded us of the chips and salsa from Chi-Chi's.

We struck gold with this dish! It not only reminded us the most of a Chi-Chi's chimichanga, but it was also the best dish overall of the places we ate at. Both the chicken and beef chimis were fresh, hot and lip-smacking and the rice and beans were delightfully flavorful. The sweet corn tamalito was sugary and creamy and was the perfect last bite, like a mini side dessert. We licked this plate clean! The service was great and the ambiance was colorful and festive.

Chevy's Fresh Mex is today's modern equivalent of a Chi-Chi's and it really brought us back to those marvelous chimichanga dinners we had as a kid. Although priciest of the 4 restaurants (because of its location), Chevy's really delivered the most satisfying meal in this quest.

We are 'taking a bite out of America’s best snack foods' with the quintessential Southern candy, Stuckey's Pecan Log ...
Read More

We are taking a bite out of America's best snack foods! The history of Marshmallow Fluff can be traced back to Mass...
Read More