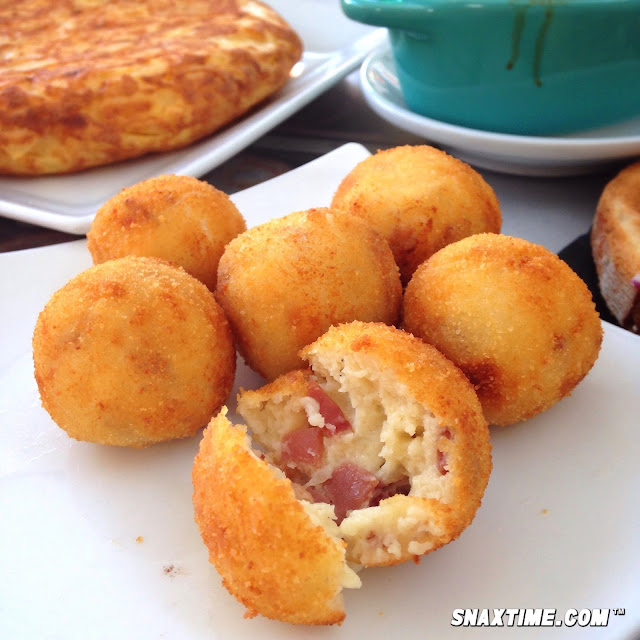 Madrid is Spain's most vibrant and exciting city and its rich culinary scene is one of the most delicious on the planet. The capital city is vastly popular right now, very affordable and the perfect getaway location to get your eat on. Yes, make certain you enjoy paella while you're there (a rice dish typically mixed with seafood and meats), but there are so many other delectable offerings in this tasty destination that you may not be aware of. Here are our TOP 10 snacking tips to eating your way through Madrid!

You can't leave Madrid without trying the classic Spanish dessert, flan. This creamy egg custard is baked with sweet, syrupy caramel that runs down the sides when inverted onto a serving dish. We found flan at La Barraca, one of Spain's most well known paella restaurants. La Barraca puts a modern twist on its flan by serving it with vanilla ice cream and a candied orange slice.

Another classic dessert is Tarta de Santiago. This simple, moist almond cake is beautifully dusted with powdered sugar. Grab a slice for merienda (afternoon snack) after a few hours of museum gazing. We ordered a slice at an outdoor cafe close to The Museo del Prado. 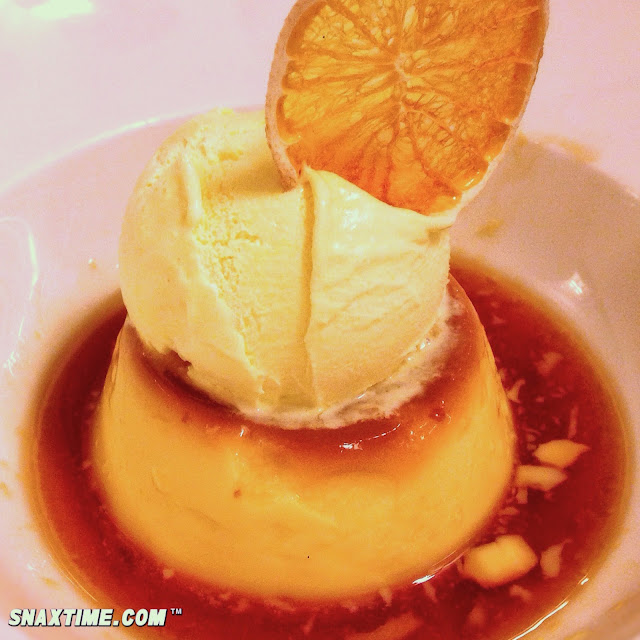 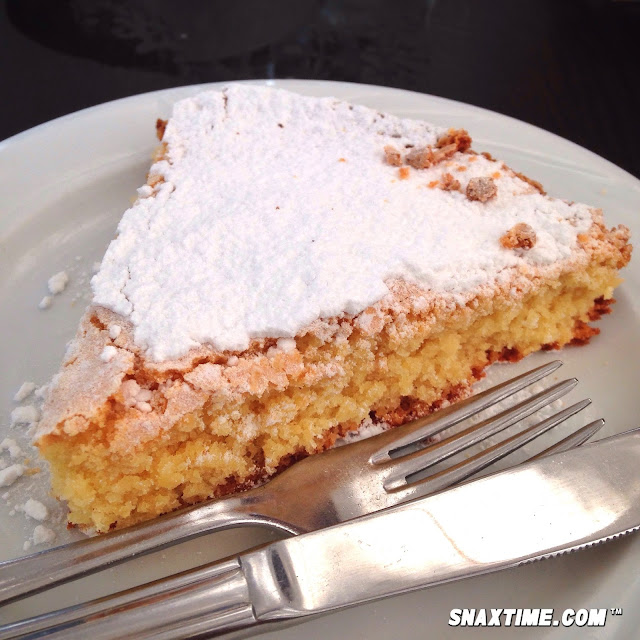 Yes, we know we're not talking about Italy, but Spain serves up a lot of pasta and pizza that is quite delicious. And albóndigas de ternera (veal meatballs) have been served for generations and are one of the most popular and prevalent tapas (appetizer or snack sized foods that can be combined to make a meal). The albóndigas from Taberna La Tía Cebolla are packed with flavor and very tender. They're cooked with carrots in the sauce which lends a subtle sweetness to the otherwise salty dish.

When walking around, you will notice many Spanish restaurants serving espagetis a la boloñesa (spaghetti w/ meat sauce). This typical Spanish dish is sure to be rich and flavorful. We ate a plate at Bodeguita Los Rotos on Calle Huertas, 74, and it did not disappoint.

Spanish pizza is a tad different from American pizza, but it's just as tasty and worth giving a try. A lot of pizza places are open until the wee hours of the night and offer interesting varieties like tuna or gorgonzola cheese. We tried a pepperoni slice from Pizzòlu Madrid and the crust was crisp yet bubbly, and the cheese and meat tasted fresh and hot.

For a more hip, upscale (yet reasonable) and modern take on Spanish/Italian, head over to Bosco de Lobos. This trendy restaurant has been making waves in the Spanish culinary world. The staff is very friendly and the food is just divine. We recommend the tuna sashimi w/ chipotle mayonnaise, and avocado on corn tortillas, the eggplant and parmiggiana croquetas and the pizza with Porchetta, eggplant and honey mustard sauce. 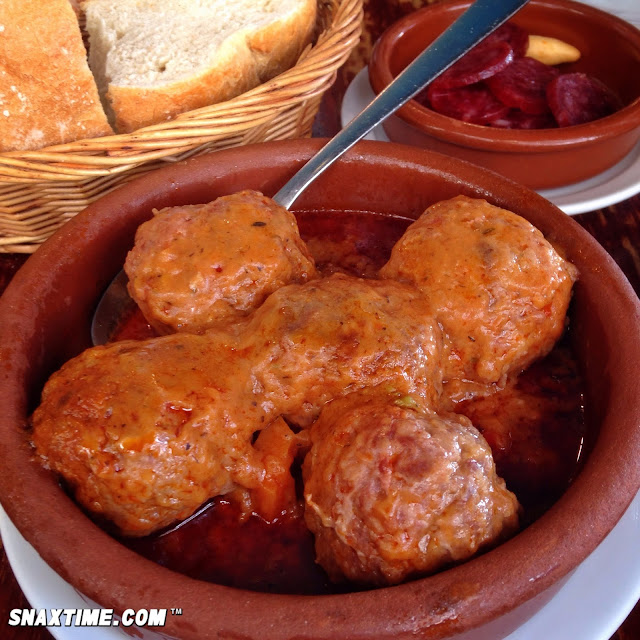 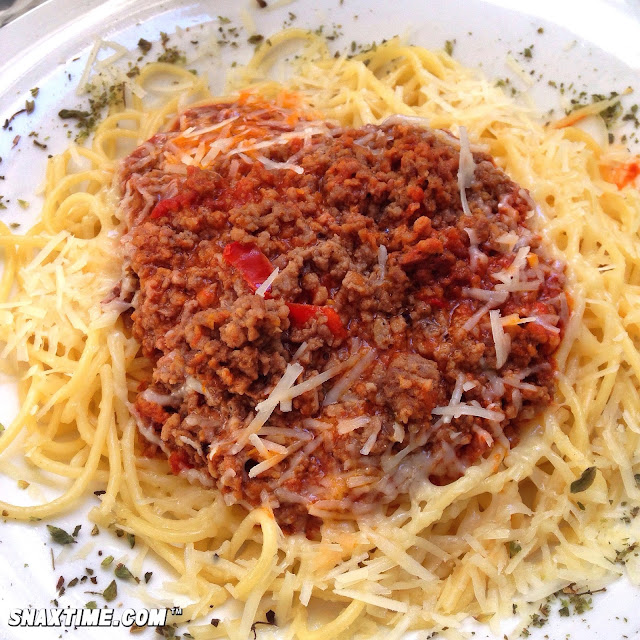 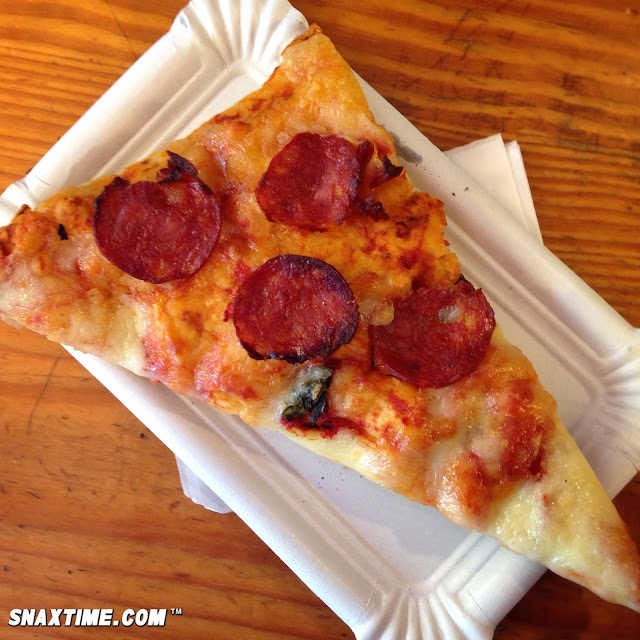 Just because you're visiting a foreign country doesn't mean you should cut out junk food. In fact, prepackaged snack foods and candy are often some of the most interesting aspects of a culinary culture. We recommend you take a stroll through one of the expansive supermarkets at a El Corte Inglés, Spain's main department superstore, and get acquainted with the local munchies. That's where we found Ruffles York'eso and Lay's Mix. The Ruffles are jamón York (cooked ham) and cheese flavored and the Lay's are a mix of pizza and queso queijo (white cheese) flavored potato chips.

We also found some Martínez magdalenas (small sweet cakes) in cool packaging. These popular muffin-like cakes are great for breakfast or for a light snack. And these Pantera Rosa (Pink Panther) by Bimbo are super fun, unique and delicious.

Keep an eye out for gomis (gummies). There are a lot of quaint candy shops right off La Plaza Mayor where you can find tons of toothsome treats in neat flavors. 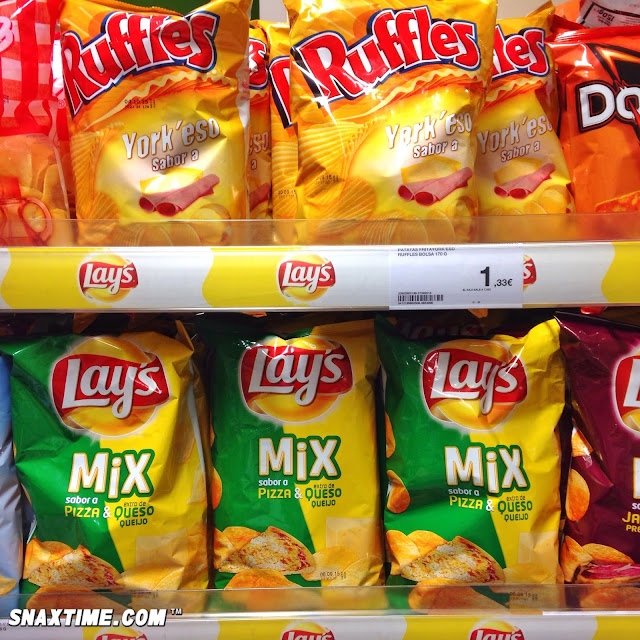 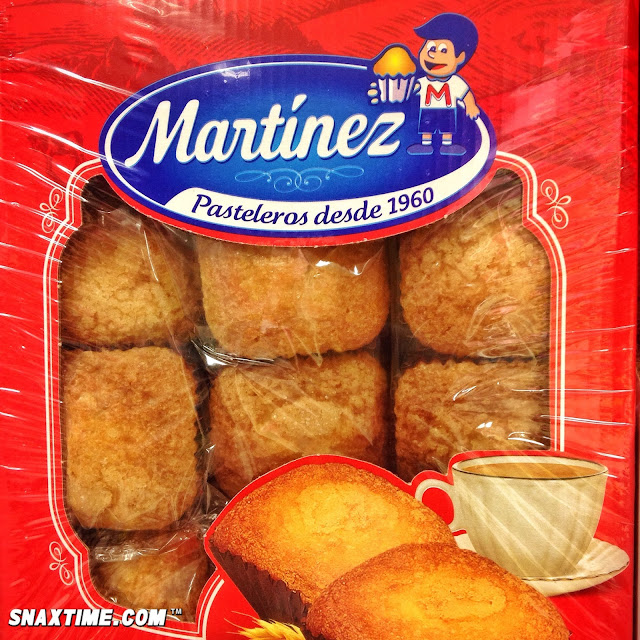 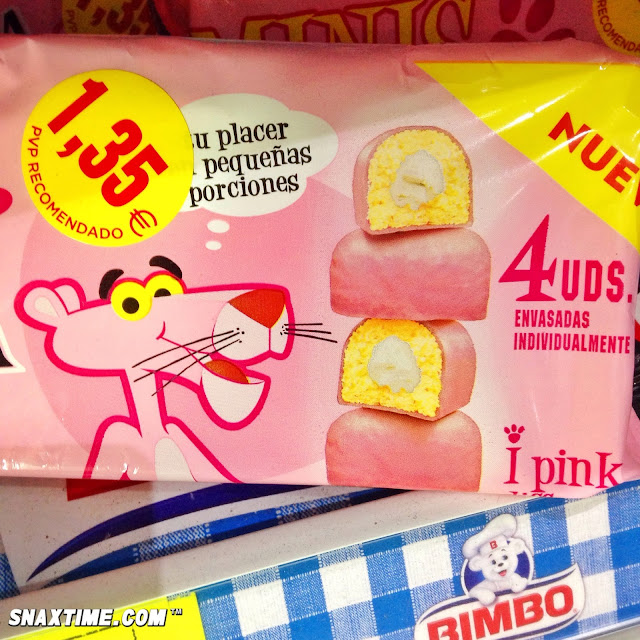 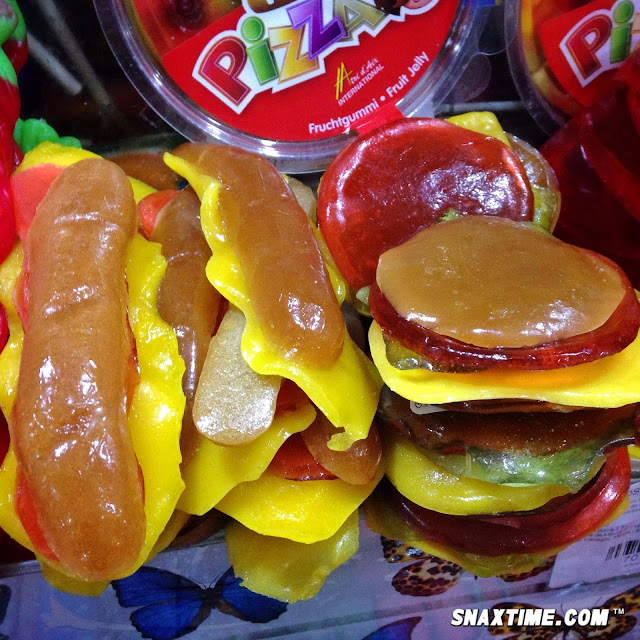 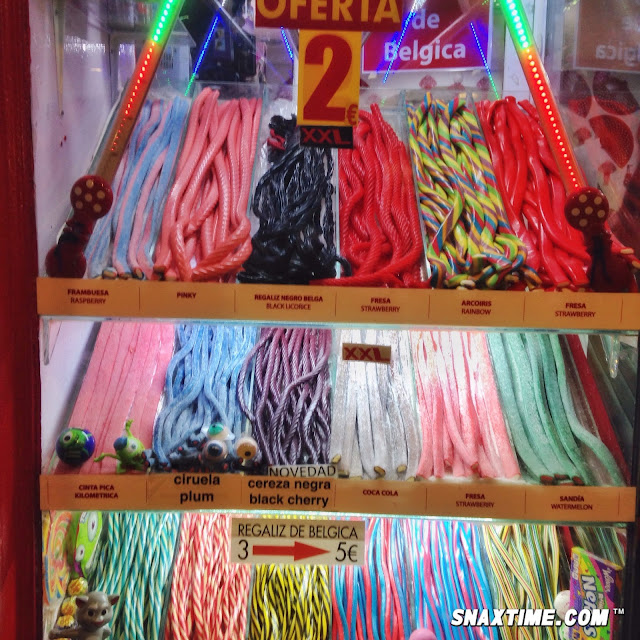 While not close to the ocean, Madrid is always serving fresh seafood and their fried offerings are some of the best we've had. Buñuelos de bacalao (codfish fritters) are a sure bet when ordering a small bite. These pillowy fried fritters are filled with delicate codfish and the flavors are just phenomenal. We found some great buñuelos at La Barraca.

When doing tapas, be sure to try some fried boquerones (anchovies). Fresh anchovies are not as fishy as the ones we're used to finding on pizzas and caesar salads, and when fried they're something special. Squeeze some lemon on 'em and don't be afraid to eat them whole, tail and all. We had some nice boquerones at Taberna La Fragua de Vulcano. This is the same spot we ordered cazón (shark). If you've never had fried shark, you're missing out. This delicacy melts in your mouth and has a tangy quality to it that is akin to lemony chicken! SO GOOD! 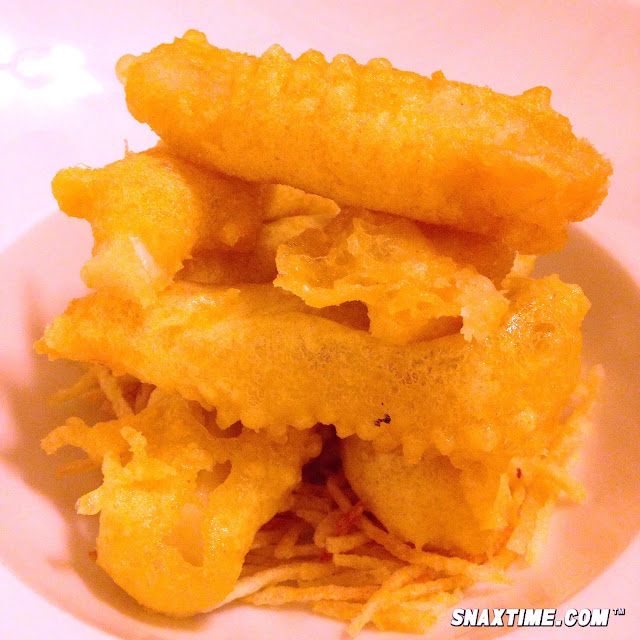 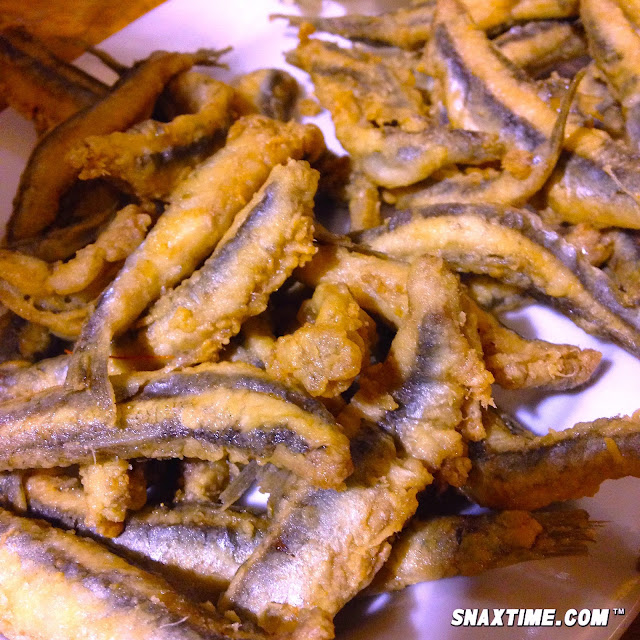 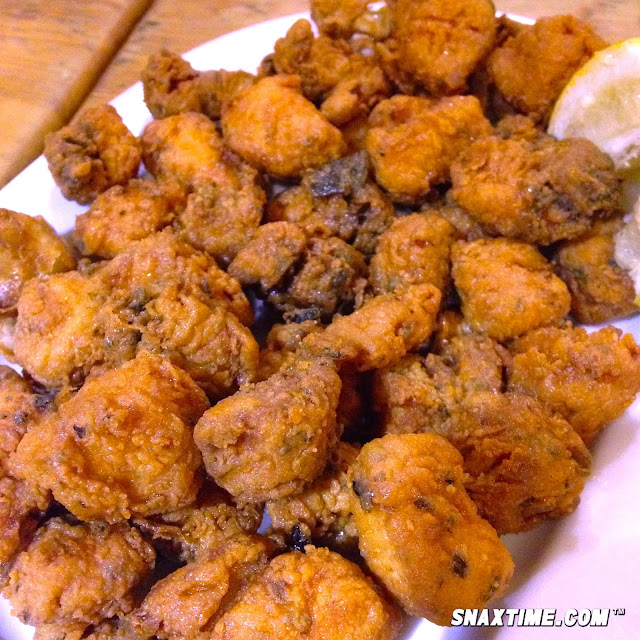 When you order a caña at a bar in Spain, you're ordering a small glass of the house tap cerveza (beer). This is the perfect way to bar hop as you can enjoy a small sampling of what the establishment has to offer before moving on to the next place. At some places, cañas will run you only €1 (about $1) and bartenders will more than likely serve your cervezas with a complimentary pincho or pintxo (small bite). We ordered up some cañas at Mesón de la Cerveza on Calle Cuchilleros, 2, and they came with a small plate piled with fried potatoes in tomato sauce, sliced chorizo (sausage) and fried pimientos (peppers). It's mind boggling that the three small beers and delicious pincho cost only €3 but that's exactly what it came to.

Pinchos are often gifted at restaurants too while you peruse the menu. At Taberna La Tía Cebolla, we were served some tasty grilled chorizo bites and crackers with our Pepsi Lights. 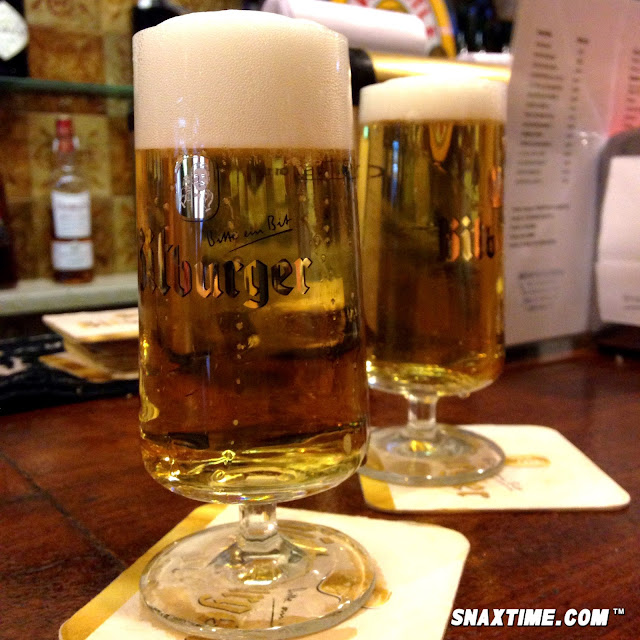 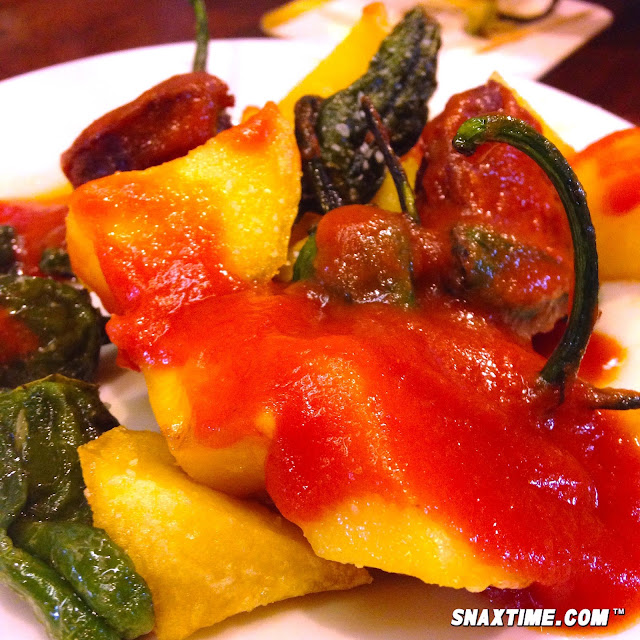 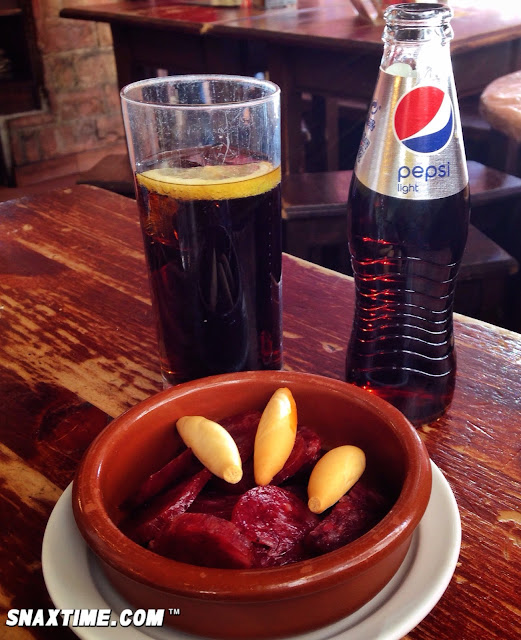 VIPS is a Spanish chain cafeteria with an American inspired menu. From burgers to milkshakes, VIPS is Americana done Spanish style and it has been wildly popular for decades with tons of locations throughout Spain. But don't be mistaken by the menu offerings, this restaurant is quintessentially Spanish and loved by locals. We especially adore the location on Calle de José Ortega y Gasset, 29, for its retro architectural design and for its impressive book store, which carries a fun selection of novelty items, magazines, comics and snack food. When asking for a table, ask to sit inside and start with the Croquetas de Jamón (ham and cheese croquettes -- we'll talk about these later!). Then try their signature VIPS Club. This is one of the tastiest club sandwiches we've ever eaten. It comes piled high with grilled chicken, ham, bacon, 2 cheeses, lettuce, tomato and mayonnaise. It's truly V.I.P.! And take note, Spaniards love to eat their sandwiches with a fork and knife. 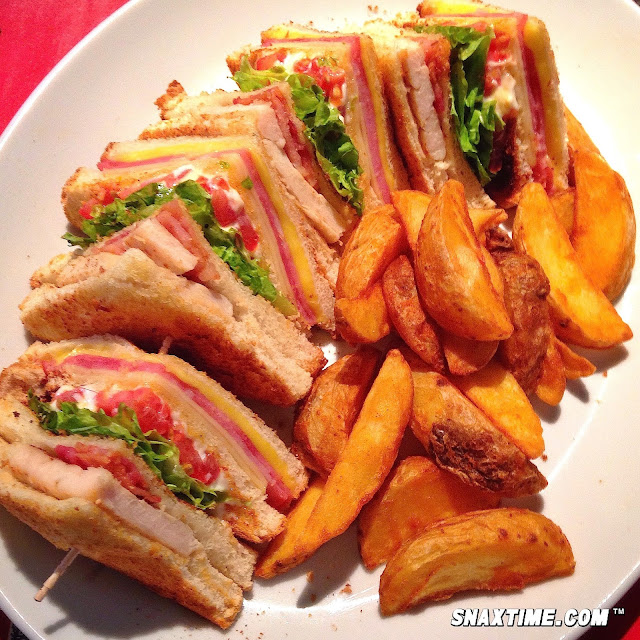 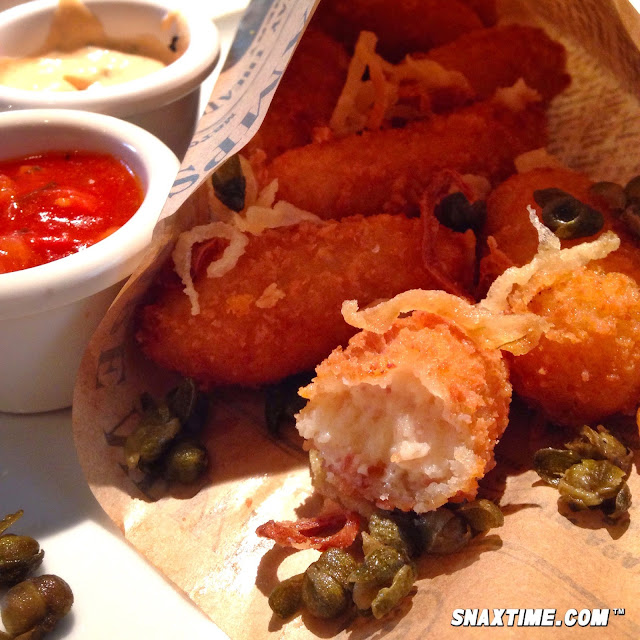 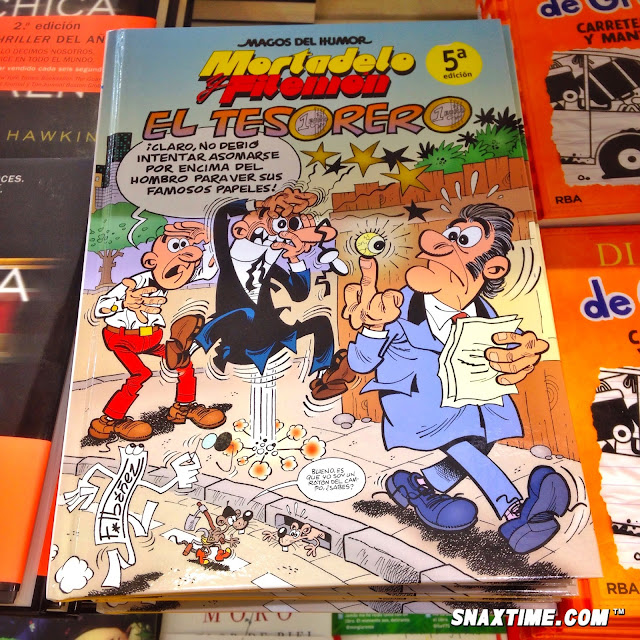 The Spanish love churros (fried-dough pastry) and you can get them at all hours of the day. They are typically paired with Spanish style hot chocolate, which is super rich and thick, like hot pudding. We had some for breakfast at a small cafe on Calle del Príncipe de Vergara. There are some popular churros places in the La Latina neighborhood in the center of Madrid so keep an eye out for people lining up late into the night. 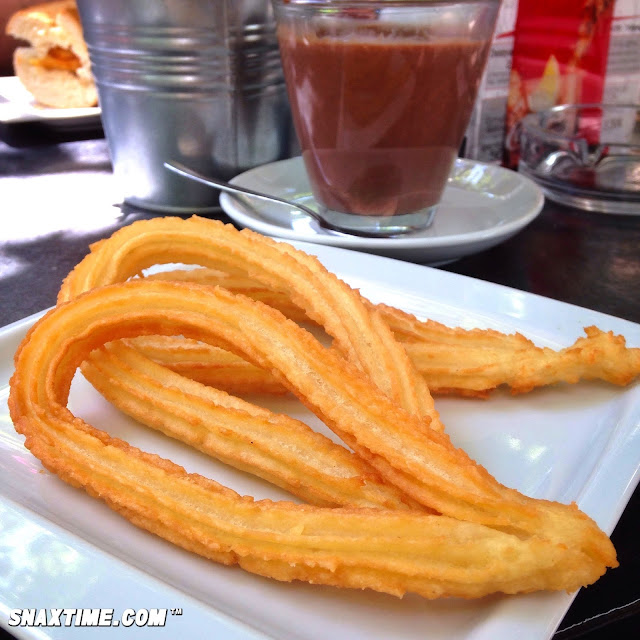 Spain really knows how to do potatoes and the flavor and texture of these potatoes is different from what we get in the USA. Spanish potatoes are more yellow in color and are super creamy. They fry beautifully and you will see fresh potato chips served at many bars.

The perfect way to enjoy potatoes is in a Tortilla Española (potato and egg frittata), perhaps Spain's most signature dish alongside paella. We had a delectable tortilla served with tomato toast at Restaurante Ana la Santa in Plaza de Santa Ana.

To get to the true essence of the Spanish potato, look for patatas bravas or patatas alioli (spicy potatoes or potatoes with garlic aioli). Just about every bar/restaurant serves these deep fried potato chunks smothered in savory sauce. Restaurante Ana la Santa serves a luxurious version that is both spicy and creamy with loads of fresh garlic aioli. 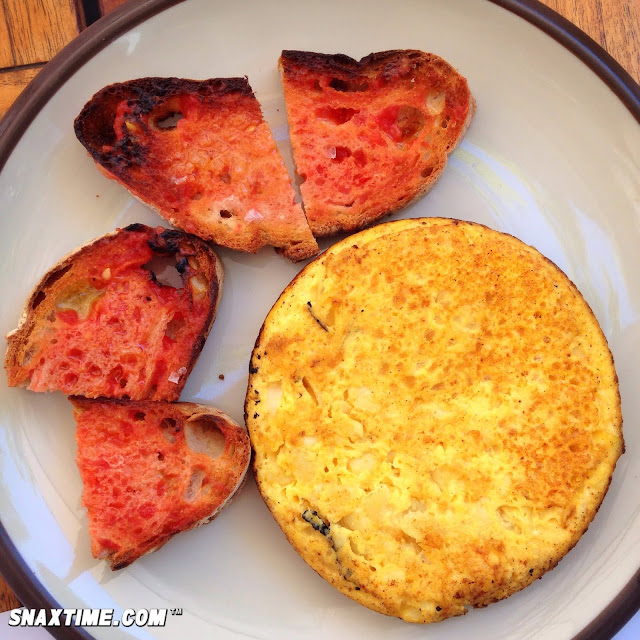 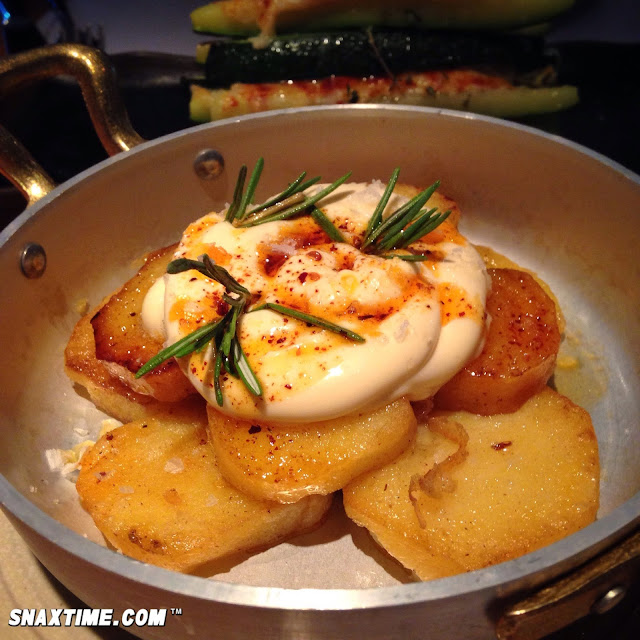 Our favorite Spanish sweet treat has to be turrón. Turrón is a nougat confection made with toasted almonds, honey and sugar. It comes in different variations like soft, crunchy and "de yema," which is made extra rich and creamy with the addition of egg yolk. If you forget to try it while in Spain, you can always grab a box at the airport. But do make sure you try helado de turrón (turrón ice cream). It's a flavor you won't find readily in the USA and unless you've had it, it's hard to explain how special the taste it! 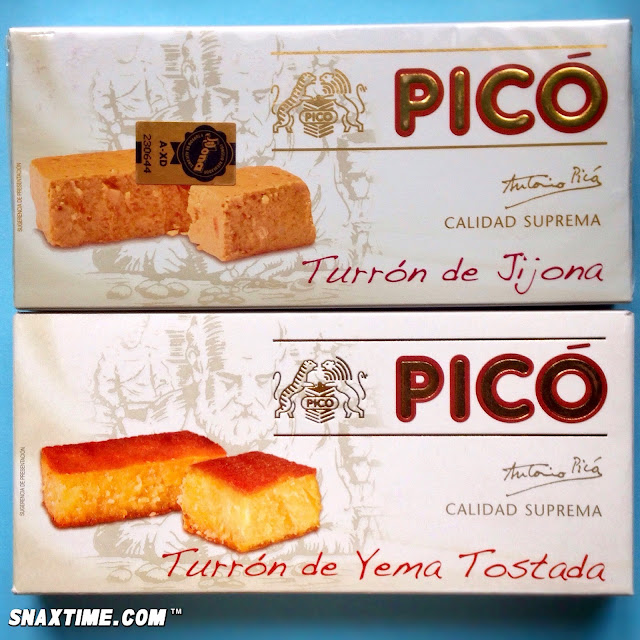 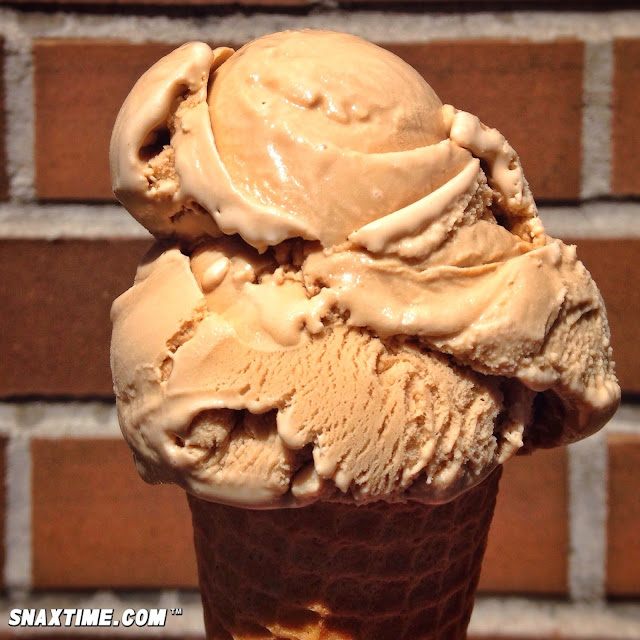 You may have been wondering what those fried things were in the first picture. It just so happens to be our favorite Spanish food which tops the list at number one -- CROQUETAS! Spanish croquetas (croquettes) start out with a béchamel base (butter, flour and milk) that is mixed with various fillings like ham, cheese, chicken, vegetables or fish. They are then rolled in breadcrumbs and deep fried until golden and crisp. Croquetas de jamón (ham) are the most popular variety of this quintessential tapa, but Spanish chefs are always coming up with creative versions, like the parmesan eggplant croquetas we mentioned from Bosco de Lobos.

Cafetería Magerit in La Plaza Major serves a beautiful example of the classic Spanish ham croquette (the first picture of the article). The outside is crusty and the inside is buttery, velvety goodness with savory ham bits. The croquetas de jamón at VIPS are standout as well and come served with capers, fried onions and two dipping sauces.

Bodeguita Los Rotos on Calle Huertas, 74, serves a vegetable and goat cheese version for those who are looking for a meatless croqueta, and they are presented in a cute fry basket. We also enjoyed the croquetas at Restaurante Ana la Santa, which were super creamy on the inside and extra crispy on the outside because of the use of panko crumbs.

You must savor croquetas while in Madrid. Just about every menu has them. So don't be shy, go ahead and order them at every meal! 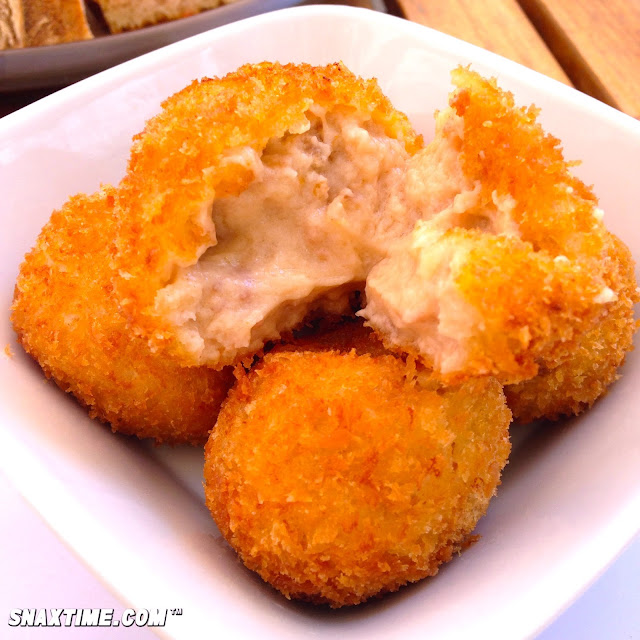 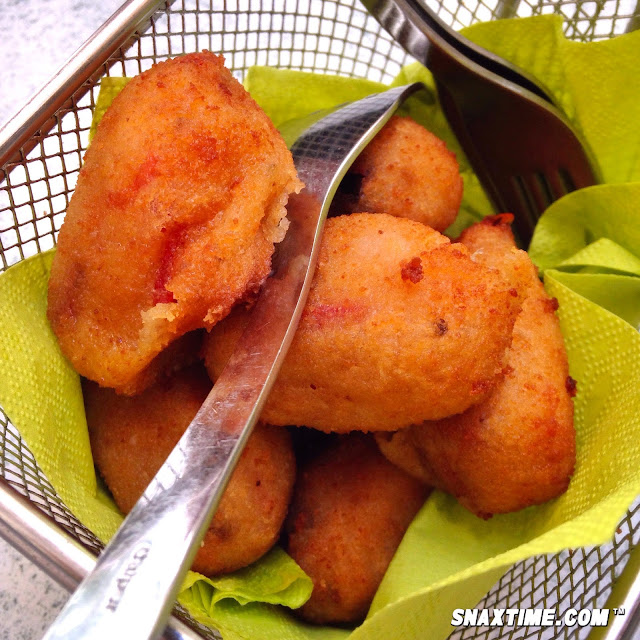 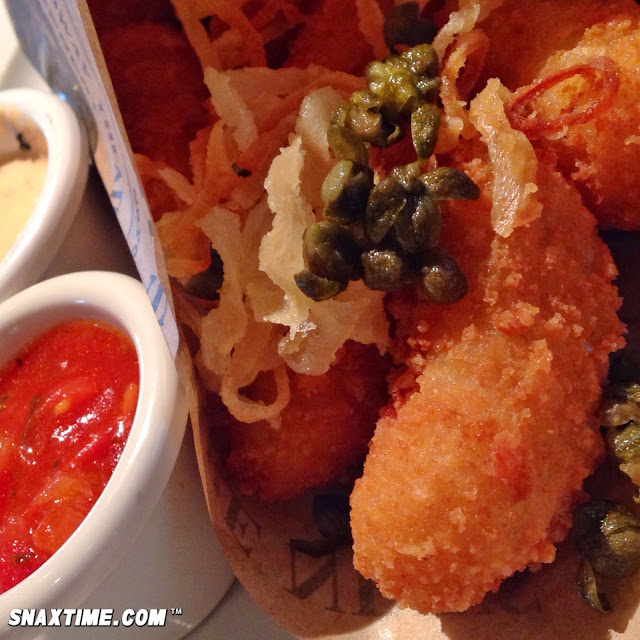 There are so many other mouthwatering products to seek out in Madrid, like the refreshing tomato soup, gazpacho, or the sweet, fruity wine beverage, sangria. Spain is also known for its fine cheeses and pork products like jamón ibérico, jamón serrano, morcilla (blood sausage) and manchego cheese. Sherry, cava and other wines are popular too so make sure you get out there and try as many as you can. When visiting Madrid, arrive hungry and with an open mind. ¡Olé!